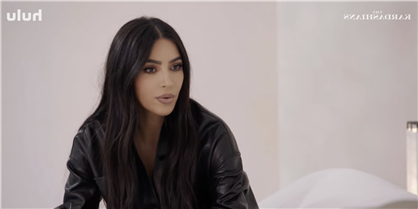 Hulu just casually dropped a new trailer for The Kardashians, and it’s honestly full of bombshells. On top of learning that Travis Barker and Kourtney Kardashian are planning a pregnancy (and getting our first on-screen appearance of Scott Disick), Kim opened up about her split from Kanye West.

Kanye is featured in the trailer (so presumably he gave Hulu his permission to film), and we hear Kim say in a voice-over “it is really hard with Kanye.” In addition to that, we see a brief snippet of a conversation that Kim has with Kourtney, where she reveals that “he told me my career’s over.” Yikes / false. Meanwhile, right after that clip, we see footage of Khloé Kardashian telling her sisters “Why are we always making excuses for the people that traumatize us.”

So, what about Pete Davidson? He isn’t mentioned directly, but the trailer goes ahead and includes footage of Kim and Pete kissing on SNL as Kris Jenner muses “this is a relationship that I don’t think anybody saw coming,” and we also see and Kim texting him during an interview. As in, she’s smiling as a producer asks “who you texting Kim? Does his name rhyme with feet?”

Kim previously opened up about the Pete of it all to Variety, saying “You’ll just have to see, but I’m always open and honest and I’ll never not be, so you’ll definitely get that honesty and openness when it comes to the relationship that I’m in. I definitely explain how we met and who reached out to who and how it happened and all the details that everyone wants to know. I’m definitely open to talking, and I definitely explain it.”

She also noted that “I have not filmed with him. And I’m not opposed to it. It’s just not what he does. But if there was an event happening and he was there, he wouldn’t tell the cameras to get away. I think I might film something really exciting coming, but it wouldn’t be for this season. It wouldn’t reach until next season.”