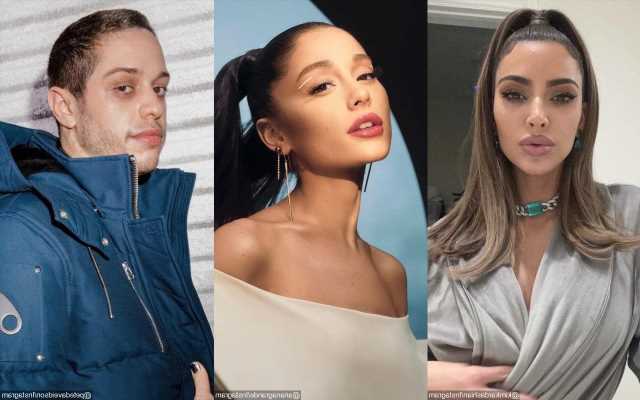 Amid her rumored relationship with ‘The King of Staten Island’ actor, the ‘Keeping Up with the Kardashians’ alum cannot resist testing out his ex-fiancee’s new cosmetics products.

AceShowbiz –Kim Kardashian is proving that she’s staying friendly with Pete Davidson‘s ex-fiancee Ariana Grande. The “Keeping Up with the Kardashians” alum admitted to feeling “excited” over the “Side to Side” singer’s new makeup collection amid her rumored romance with the “Saturday Night Live” cast member.

On Saturday, November 13, the 41-year-old reality star unboxed a PR package from REM Beauty. “Special delivery from Ariana and REM Beauty,” she told her followers. “Look at this, I’m so excited!”

“I think someone else in here is so excited. Northie, are you so excited? She said, ‘Oh my god, I saw this!’ ” Kim continued in her video. Her eldest daughter then chimed in, “Yeah, I saw this on TikTok.”

In the following clip, Kim showed off the various pieces from Ariana’s makeup collection. The KKW Beauty founder said, “I love this little palette, you know, I love neutrals.” She continued praising “The Voice” judge and mentor’s products as saying, “And her highlighters. The lipstick…how cute. Of course, she has an eyeliner and mascara.” She then called her daughter North, “Here, Northie, eyeliner. Fun to play with. You guys are going to do some holiday makeup?”

The “Dangerous Woman” songstress launched her debut makeup line earlier this week. “It means so much to me to be able to create a product line for absolutely everybody and anybody who wants to wear it and feel incredible,” Ariana said in a statement shared on the brand’s website.

“Makeup is so personal and to have the opportunity to help people feel even more beautiful than they already are in their own skin,” Ariana added. The Grammy-winning artist went on to note that she wants to “provide tools that support and encourage people in their creativity and self-expression is a gift that [she]’ll never take for granted.”

Having a bit more in common than just their love for makeup, Kim has been romantically linked to Ariana’s ex-fiance Pete in recent weeks following her “SNL” hosting debut. In a skit of the NBC show, she even shared a lingering kiss with the comedian.

Amid their rumored relationship, a source told Us Weekly, “He makes her feel good and she’s excited to see what happens. Everything flows well [when they’re together].” A separate source spilled to HollywoodLife.com that “Kim has not stopped talking to her sisters about Pete since ‘SNL’.” The informant added, “They text all day everyday and she shares these texts with her sisters. She is very much into him and this is not a fling it seems.”

Another source spilled to the publication that Kim, who recently had a dinner date with “The King of Staten Island” actor in Manhattan, is also “very attracted” to him. It’s said that his “sense of humor” is one of the reasons. “Kim never saw this one coming but she’s very attracted to Pete,” the insider shared. “I think most women can admit that a great sense of humor in a guy can be very attractive. It has a certain allure that women are drawn to. And Pete just has that quality about him.”

Kim and Pete were rumored to be in a relationship after they were caught holding hands on a rollercoaster ride during a trip to Knott’s Scary Farm in Buena Park, California on October 29. It’s also reported that the rumored lovebirds spent a week together when she hosted “SNL”.