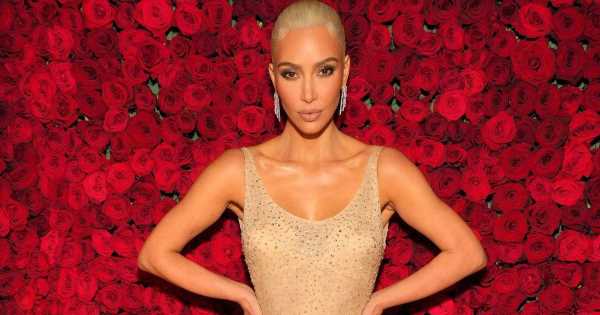 Kim Kardashian failed to break a smile as she stepped out in red, after the latest episode of The Kardashians revealed the extremes she went to so that she could fit into Marilyn Monroe's dress.

The reality star, 41, was criticised after she lost 16lbs in just three weeks to fit into a dress worn by the famous movie star to this year's Met Gala.

Kim tried to keep a low profile in New York as she went out for dinner wearing a long red trenchcoat, hiding behind a pair of oversized sunglasses.

The star paired her bold coat with a pair of skinny trousers and black boots, keeping her platinum blonde locks loose for her evening out.

She also clutched a small black bag and wore a delicate necklace to complete her look.

It comes after a new episode of The Kardashians revealed the lengths Kim went to to fit into Marilyn's iconic dress that was worn for her famous 1962 performance of Happy Birthday to US president John F Kennedy.

The star wore the dress for just a few moments on the red carpet – andcame under fire over claims she damaged it– before changing into a replica dress for the rest of the evening.

However, those few moments were weeks in the making, as revealed in the new episode.

Episode seven of the new series shows the star trying to slim down to fit into the dress, calling herself a “shape shifter” as she underwent an extreme exercise and diet plan.

She explained: "So… I don't know how to convince the guy who owns the original Marilyn dress that I'm a shape shifter."

"This has stretch," she said as she tried on a replica. "The original doesn't have stretch.

She is then seen walking on a treadmill as she explains her determination to fit into the dress, saying: “‘I have about three weeks to fit into this dress. I’m going to do every last thing that I can to try and make this happen.”

Elsewhere, fans saw the star working with a personal trainer and claiming she will have to cut out sugar and eat “so clean” to fit into the garment.

Another shot shows Kim working out in a sauna suit, which is claimed to help with weight loss and detoxification.

The reality star came under fire after she told BFF and Vogue guest host La La Anthony on the Met Gala red carpet this year that she'd had to lose over a stone in just three weeks, in order to sport Marilyn's iconic gown.

Kim shared: "It was like preparing for a role.”

"So when it didn’t fit me I wanted to cry because it can’t be altered at all."

"I would wear a sauna suit twice a day, run on the treadmill, completely cut out all sugar and all carbs, and just eat the cleanest veggies and protein.”

However, the star insisted: “I didn’t starve myself, but I was so strict."