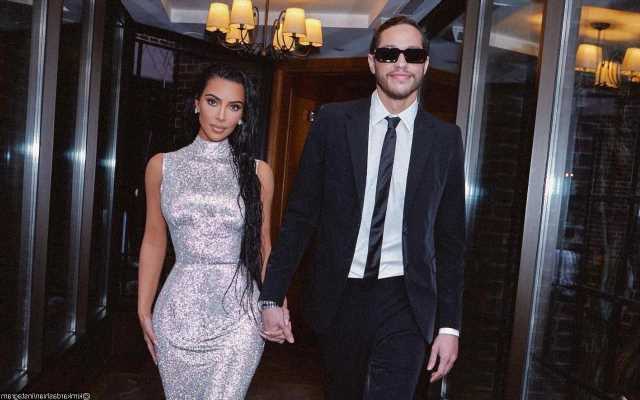 In a new episode of ‘The Kardashians’, the SKIMS founder sings the ‘SNL’ alum praises, calling the comedian ‘literally, the best human being I’ve ever met.’

AceShowbiz –Kim Kardashian finally shared the full story of her romance with Pete Davidson. After teasing it for weeks on “The Kardashians“, the SKIMS founder dished about her relationship with the “Saturday Night Live” alum and how it all started in a new episode of the Hulu show.

“Honestly, I just feel like I really wanted to make sure and not just be so, ‘Oh my gosh, I met someone and I’m having fun’ and then just start talking about it on the show,” Kim explained in the Thursday, June 2 episode of “The Kardashians”. “And then if we weren’t talking months later I’d be, like, an idiot…or a whore.”

Her sisters, Khloe Kardashian and Kourtney Kardashian, refused to leave Kim alone as they pressed her for details about her love life. “Can’t a girl just be happy and live?” the ex-wife of Kanye West asked while smirking. “That’s what I keep on saying. Happiness, peace, zen, laughter. That’s all I want and I got it.” Khloe then asked Kim about the “laughter” part of the equation, seemingly trying to make Kim refer to Pete. “A lot of laughter?” she wondered, adding, “Stand up comedy?”

Eventually, Kim elaborated how she and Pete began their romance. “I did ‘SNL’ and when we kissed in scene it was just a vibe,” Kim recalled. “I was like, ‘Oh s**t, maybe I just need to try something different.’ But Pete does not come to my after-party.” She continued, “Everyone was at my after-party. He does not give me the time of day. So a few days later, I called the producer at ‘SNL’ and I was like, ‘Hey do you have Pete’s number?’ and they were like, ‘Yeah.’ And I text him.”

Kim added that she wasn’t planning to get into a relationship with him when she first texted him. “I was just thinking, like, I heard about this BDE and I need to get out there. I need to just jumpstart. I was basically just DTF [down to f***],” she shared.

The mom of four later sang Pete praises, calling the comedian “literally, the best human being I’ve ever met.” She continued gushing, “The best heart. People always say he’s so funny and it all has to do with how funny he is. But that’s, like, fourth on my list of why I like him. He always wants the best for people, can handle anything, always does it with grace. He’s really, really thoughtful and humble and so genuine. I would say the perfect word to describe him is genuine.”

Apparently, Pete tried to shoot his shot with Kim before she made appearance on “SNL”. “Megan Fox texted me and was like, ‘Is this s**t for real? Because he asked me for your number months ago,’ ” Kim revealed. Megan allegedly told Pete, “Dude, you have a better shot of me and Machine Gun Kelly getting eaten by crocodiles than you ever getting her number.”