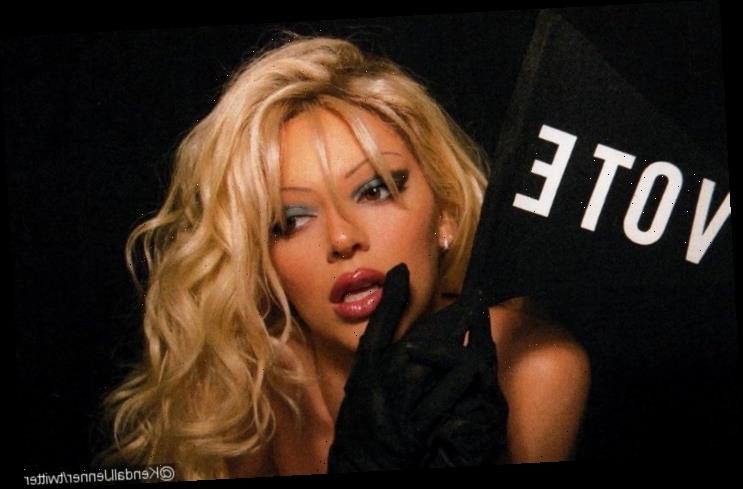 Although the model holds a rapid COVID-19 test on site, people still criticize her for being ‘so f***ing irresponsible’ by ‘hosting a halloween party in the middle of a pandemic just bc her family and the attendees are rich celebrities.’

AceShowbiz –Kendall Jenner had a blast on Saturday night, October 31 as she threw a big party to celebrate both her 25th birthday and Halloween. Taking place at Harriet’s Rooftop atop 1 Hotel in West Hollywood, the bash featured celebrities such as Justin Bieber, The Weeknd, Kim Kardashian and husband Kanye West as well as Kylie Jenner in attendance.

Also among the party-goers were Hailey Baldwin, Scott Disick, Travis Scott (II), Jaden Smith and Paris Hilton. Quavo, Kendall’s fellow model Winnie Harlow, Saweetie and Justine Skye were also at the party. It was reported Kendall followed COVID-19 protocols as everyone who entered the venue had to test negative for COVID-19 in a rapid COVID-19 test which they held on site.

For the bash, Kendall opted to dress up as Pamela Anderson‘s bounty hunter character in her 1996 movie “Barb Wire”. Wearing a plunging black corset, matching stockings and knee-high boots, Kendall, who donned a blonde wig, was seen in an Instagram post hopping on a big motorbike while holding a flag with the word “VOTE” on it. ” ‘don’t call me babe’ happy halloween! GO VOTE!!! me as Pamela Anderson in Barb Wire,” so Kendall captioned the post on Saturday.

Meanwhile, Kylie dressed up as a King Cobra. The Weeknd went all out to be Nutty Professor and it was reported that the “Starboy” hitmaker spent six hours for the transformation. Saweetie arrived as Mystique, Jennifer Lawrence‘s character in “X-Men”.

As for Sofia Richie, she transformed into DC Comics character Catwoman for the night. She oozed sexiness in a black and silver sequined criss cross section over her abs. The model then completed her look with black arm warmers, black fitted ripped jeans, black pointed heels as well as a black mask which featured pointy black ear parts on top. Justin, meanwhile, was a Woody from “Toy Story” with Hailey recreating Sarah Paulson‘s Nurse Dolly character from “Ratched“. Travis chose to be a Batman.

Fans, however, slammed Kendall for throwing a big party amid COVID-19 pandemic. “Ok Kendall Jenner blowing out candles as a masked waiter holds her cake and tries to move out of the way was actually the scariest thing I saw on Halloween,” a fan wrote on Twitter. Another critic said, “no but kendall jenner really threw a big a** party with all those celebrities without masks in the middle of a pandemic with a ‘no social media’ rule so people wouldn’t find out about it….”

“kendall is so f***ing irresponsible for hosting a halloween party in the middle of a pandemic just bc her family and the attendees are rich celebrities who couldn’t care less about thousands of people drying everyday bc of covid and they’re out there partying literally F**K OFF,” one person added.