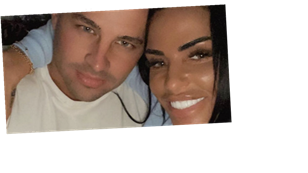 Katie Price has admitted the video she shared of Carl Woods saying he had proposed to her was “just comedy fun”, after sparking engagement rumours recently.

On Saturday evening, the 42 year old posted a clip to her Instagram of Carl, 31, filming himself while asking his girlfriend: “What happened babe?”

Carl, who is on holiday in Turkey with Katie and two of her children Junior and Princess, then turned the camera to Katie and said: “He just proposed to me.”

The former Love Island hunk then turns the camera to the couple he and Katie are sat with, which was comedian Paul Smith and girlfriend Lori Callow, and asked: “Did we both propose?”

To which Katie and the couple said: “Yes!”

Carl then asked: “Did you say yes?” And Katie repeated: “What did you ask me babe?”

Her beau then replied: “Will you marry me?” To which Katie beamed: “And I said yes!”

Carl turned the camera and asked the couple the same thing to which Paul said: “I asked her if she would marry me and she said yes.”

The group then cheer as the clip ended. Katie shared the video on her Instagram page and told her 2.3million followers: “OMG @carljwoods just proposed to me I said yes” followed by a red heart emoji.

Katie continued: “same time as @paulisthejoker proposed to @lorscal_phibrows and she said yes” followed by a red heart emoji.

Katie and Carl, who got his and hers veneers while in Turkey, went public with their romance at the beginning of August.

Hours before the prank proposal, Katie gushed over Carl in another Instagram post, telling her fans Carl has taught her not to feel “insecure”.

As she shared a photo of her hunky man’s back on her Instagram story, she wrote above it: “This man @CarlJWoods has finally taught me I don’t need to be insecure or need to crave attention by other guys.

“My guard is finally down he has my trust and I trust him … Pure gentleman throughout, I totally adore him” followed by a red heart emoji.