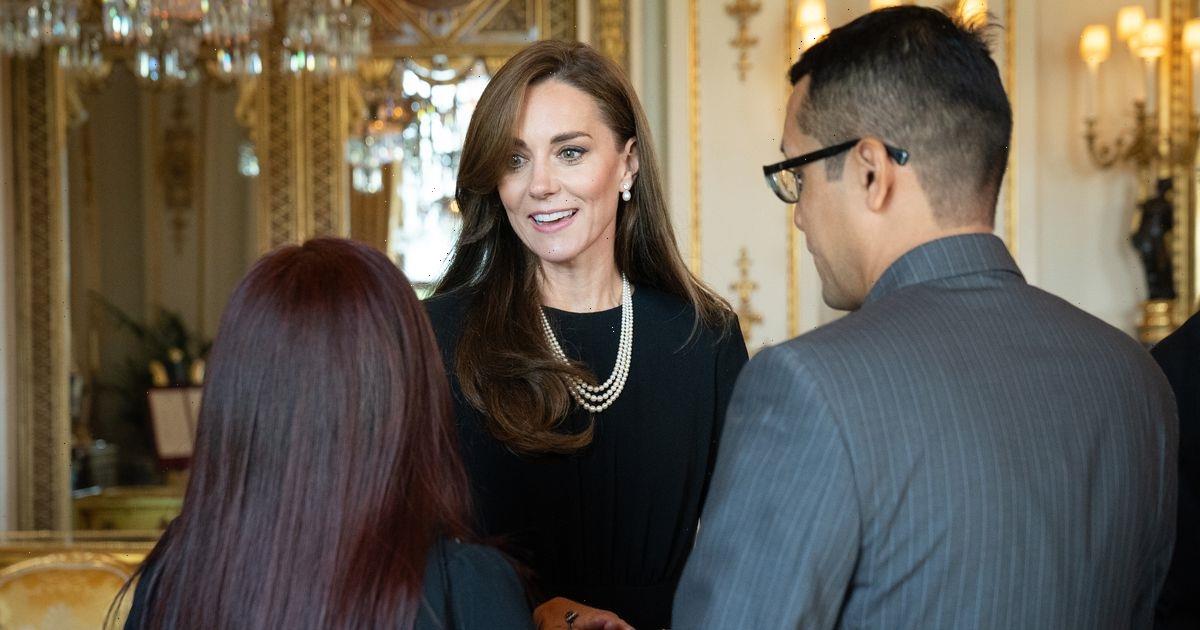 Kate Middleton has paid a touching tribute to the late Queen Elizabeth II as she and husband Prince William joined the Queen Consort, Camilla, and King Charles III to host the governors-general of the Commonwealth at Buckingham Palace.

The Princess of Wales, 40, appeared ini an all black outfit, wearing a midi, long-sleeved dress with black tights and high heels. Styling her brunette mane down, she completed the look with the late monarch's signature pearl necklace.

She also donned a pair of pearl and diamond earrings that belonged to Her late Majesty.

The royals worked the room as they chatted to dignitaries from the up to 56 countries that make up the group of nations in the Commonwealth.

The two most senior royal wives showed off a close bond as they shared a moment of chatter between themselves, both of them smiling.

Camilla, 73, donned a black dress and wore with plenty of gold bracelets on her wrist and her white-blonde hair was perfectly coiffed.

Kate, 40, looked pushed her hair behind her ear as she listened to Camilla intently during the event.

Today, King Charles, 73, and Prince William, 40, delighted members of the public who were queuing to see Queen Lying-in-State, with a surprise visit.

The King and his heir warmly greeted people who had been queuing for up to 24 hours to pay their respects to the late Monarch.

King Charles and Prince William shook hands with well-wishers queuing at Albert Embankment near Lambeth Palace and spent time chatting to them.

Many took photographs and pressed against the metal barriers, eager to exchange a word with the King and the heir to the throne.

Prince William said to one person: "It means an awful lot you're here. She [the Queen] would never believe this. You'll make some friends for life [those who have met in crowd]".

He also assured well-wishers that his children, Prince George, nine, Princess Charlotte, seven, and Prince Louis, four, were "ok" and "united in grief" following the death of their great grandmother.

William also revealed that he had become emotional when he saw his grandmother's Corgis for the first time as he said: "They are being looked after – they have gone to a very good home".

King Charles is gearing up to host a historic state reception tomorrow evening – his first ever as King – which will be attended by world leaders and foreign royals.

US President Joe Biden, French president Emmanuel Macron and the Canadian prime minister Justin Trudeau are all expected to attend the Queen's funeral on Monday.

Prince William and Kate will be a big support to Charles and Camilla as they take on more royal duties, and King Charles made a touching tribute to them in his first address to the nation as sovereign.