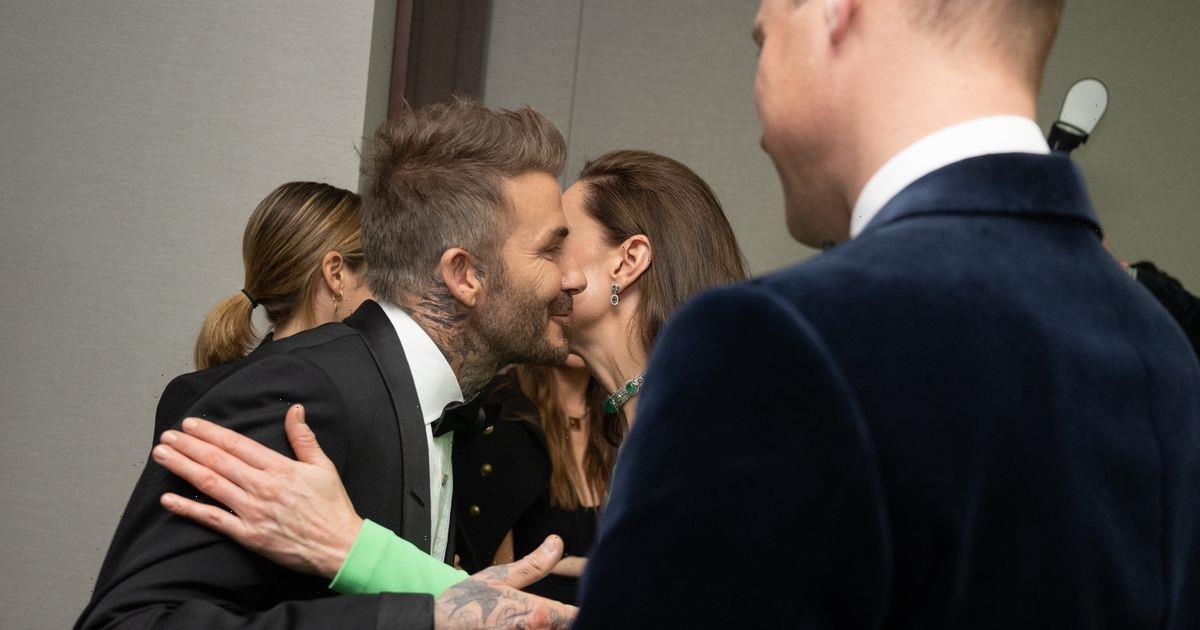 Kate Middleton was seen planting a kiss on David Beckham's cheek last night (December 2) as she greeted him at husband Prince William's Earthshot Award in Boston.

The former England star had been working as an ambassador in Qatar during the 2022 World Cup but was forced to check out of his £20k-a-night hotel after fans discovered his whereabouts.

Even so, the Princess of Wales, 40, appeared overjoyed at his surprise appearance at the environmental awareness event.

Prince William, 40, also looked thrilled to see the sportsman, 47. David drove a hybrid vehicle to the Boston venue and was even given a police escort.

Despite the event being described as "William's Super Bowl Moment" it was Kate who stole the show in her rented neon green off-the-shoulder gown.

The dress was a Solace London design and had been acquired from the online rental platform HURR – which charges between £74 and £194 to loan the gown.

The Princess accessorised her outfit by wearing her diamond-and-emerald choker that had once belonged to her late mother-in-law Princess Diana.

The stunning art deco choker had originally been gifted to Diana by the Queen, who herself inherited it from her grandmother Queen Mary.

It is reportedly valued at more than £15 million.

And because a diamond choker just isn't enough sparkle the Princess wore a pair of recycled Asprey diamond-emerald earrings.

She also wore a pair of dazzling Gianvito Rossi heels from her own shoe collection.

Kate fashion picks matched the brief given to guests to wear vintage, re-used, or second-hand clothing in order to fit the event's sustainable theme.

She styled her long brunette locks in loose waves but tucked her hair behind her ears to allow her earrings and chocker to stand out.

Throughout the evening five winners were selected for the following categories: Clean our Air, Protect and Restore Nature, Revive our Oceans, Build a Waste-free World, and Fix our Climate.

Each of the five winners walked away with $1.2 million (£1 million).

Taking to the stage, William paid tribute to the people of Boston and spoke of the legacy he hoped Earthshot would create.

He said: "We at the Earthshot Prize are all so grateful for the welcome we have received this evening here in Boston over the last few days,' the Prince began.

"When I founded this prize in 2020, it was with the ambition to harness the same spirit of ingenuity, that inspired President John F. Kennedy to challenge the American people to put a person on the moon within a decade.

"So, it has been an honour to share the stories of our Earthshot winners and finalists from the heart of his hometown.

"I believe that the Earthshot solutions you have seen this evening prove we can overcome our planet's greatest challenges. And by supporting and scaling them we can change our future.

"Alongside tonight's winners and finalists, and those to be discovered over the years to come, it's my hope the Earthshot legacy will continue to grow, helping our communities and our planet to thrive."