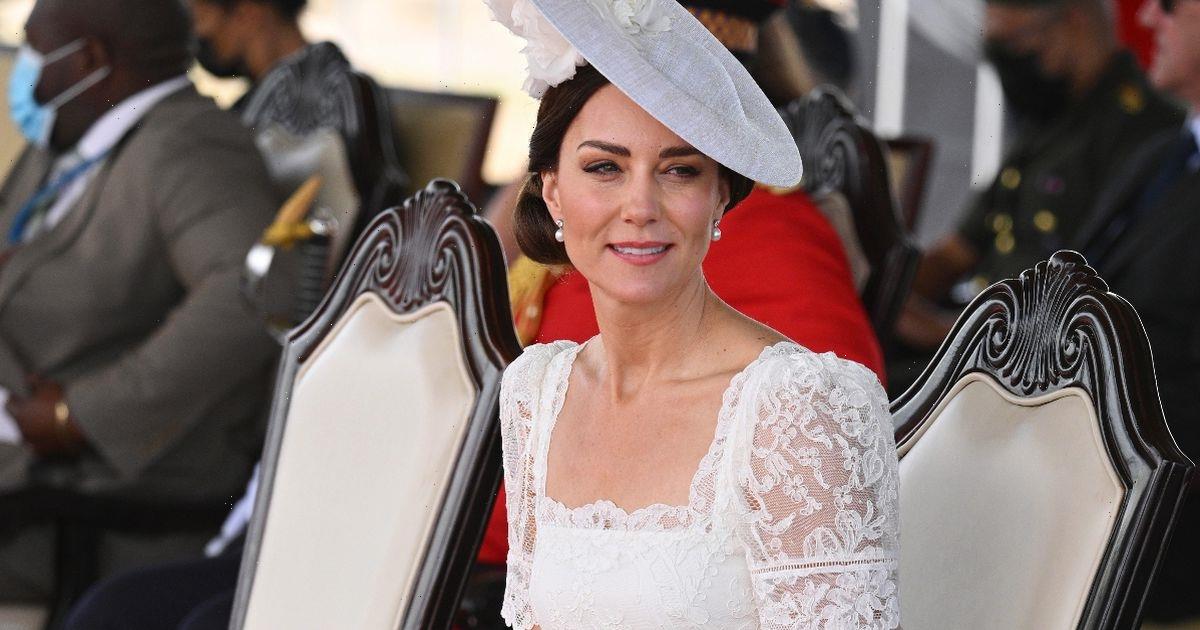 Prince William and Kate Middleton have attended an event on the final morning of their Caribbean tour, with the Duchess stunning in a white lace dress by her wedding dress designer.

On their final morning in Jamaica, the Duke and Duchess of Cambridge attended the inaugural Commissioning Parade for service personnel from across the Caribbean, which celebrates graduates of the military academy’s training programme.

Attending the ceremony, Kate looked incredible in a white, midi-length white dress by Alexander McQueen which she paired with white high-heels and a matching headpiece.

The 40 year old Duchess then had her hair slicked back into a neat bun and wore a simple pair of pearl stud earrings to complete her look.

Prince William, 39, meanwhile, wore a white ceremonial outfit as part of his role as Reviewing Officer for the parade.

The Duke was seen taking part in the parade alongside members of Jamaica's military, who wore red versions of William's uniform.

William wore a white jacket with gold button detailing over black trousers, while also wearing a pair of white gloves and clutching a ceremonial sword.

The couple then mingled with newly commissioned officers and staff after the parade, following an eventful few days on their Caribbean tour.

On Wednesday evening, the Duke and Duchess attended a dinner at the home of Jamaica’s Governor General in Kingston.

Kate stunned in an off the shoulder green gown by designer Jenny Packham for the event as well as royal jewels borrowed from the Queen.

William looked suave in black tie and the royal couple were all smiles as they posed for photos with Governor General of Jamaica Sir Patrick Allen and his wife, Patricia.

Later in the evening, William gave a speech where he addressed his “profound sorrow” over the slave trade.

“Slavery was abhorrent. And it should never have happened,” the 39 year old said.

He continued: “While the pain runs deep, Jamaica continues to forge its future with determination, courage and fortitude.

“The strength and shared sense of purpose of the Jamaican people, represented in your flag and motto, celebrate an invincible spirit.”

Earlier during the couple’s trip, Kate stunned in a white trouser suit for a meeting with the Prime Minister, as she praised teachers for their “crucial role in shaping society”.

Stepping to the podium inside the centre, Kate said: “You as teachers are at the frontline of this vital work and play a crucial role in shaping our societies by positively impacting the futures of literally thousands of young people over the course of your careers.

Secrets Of The Royal Residences

This special collector's edition of OK! looks inside the hidden tunnels at Buckingham Palace, the spectacular gardens at Highgrove, the Cambridges' town and country retreats and the cosy Welsh bolthole loved by Charles and Camilla.

It explores exactly what it takes to run a royal household, with experts and former staff revealing how they prepare to host state dinners and celebrations.

Plus, discover the history and hauntings of the residences and how you can holiday on the royal estate.

You can purchase the special edition magazinehere for £4.99.

“Decades of science and research have shown us that our earliest experiences establish the fundamental foundations that shape and connect our future lives.

For all the latest on the Royal Family, sign up to OK!'s brand new Royals newsletter.