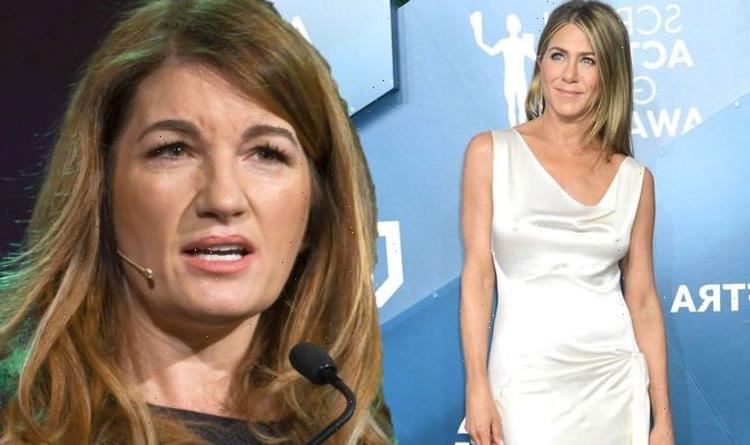 Lisa Kudrow says her son was 'obsessed' with Jennifer Aniston

The Apprentice star Karren Brady, 52, has spoken out against Jennifer Aniston, 52, questioning the actress’ dietary choices. This comes after the A-lister shared insights into her life in a new magazine interview. In her latest column, Karren discusses Barbie Dolls being seen as heroes and wishes this type of honour was given to people like Professor Sarah Gilbert, co-creator of the Oxford/AstraZeneca Jab.

Life’s just too short, isn’t it?

Professor Gilbert recently had a doll made in her name to motivate young girls to get into science, technology and engineering.

She said: “It is impossible to ignore the fact that Barbie was the original unfeasible role model.”

Karren then goes on to speak about living role models for women, including Reese Witherspoon and the Duchess of Sussex Meghan Markle.

It wasn’t long before she took a swipe at Jennifer, titling the section, ‘Chips down for Jen’.

She said: “There is no doubt Jennifer Aniston looks a million dollars – in a way that seems, if anything, to grow with age.

“But no one – I repeat, no one – looks the way she does without a serious maintenance regime and a lot of self-discipline behind the scenes.”

Karren then went on to reflect on how strict Jennifer really is, after the latter explained what she eats when she is stressed.

To clarify, Jennifer said to InStyle: “I’m good at that. I can have one M&M, one chip. I know, that’s so annoying.”

Karren responded in her column saying: “Actually, I don’t find it annoying… just very hard to relate to.

“I want to eat crisps (plural) more than I want to be as thin as Jennifer.”

The film star’s strict regime shocked many this week.

However, Karren does not envy this, saying in The Sun: “Life’s just too short, isn’t it?”

Jennifer has this week found herself at the centre of speculation surrounding if she is dating Friends co-star David Schwimmer.

The pair, who portrayed Ross Geller and Rachel Green in the hit sitcom, have been reportedly spending a lot of time together at Jennifer’s LA home, leading to rumours they are romantically involved.

The claim comes after they revealed in the show’s reunion that they were both attracted to each other while shooting the early seasons of the show.

The pair even admitted they would “spoon and fall asleep on the couch” during rehearsal breaks.

However, fans will be disappointed to know this is not the latest couple to take Hollywood.