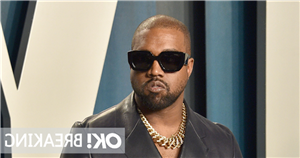 Kanye West has taken a dig at his ex wife Kim Kardashian and Pete Davidson amid reports that the pair have called time on their relationship.

Taking to Instagram on Monday 8 August, the Blood On The Leaves rapper, 45, shared a picture of the front of a New York Times newspaper with a large headline across it reading: "Skete Davidson Dead At Age 28".

His post comes after news surfaced last week that Kim, 41, and Pete, 28, broke up due to long distance.

Insiders told E! News that they still have "a lot of love and respect for each other," but they found long distance and their demanding schedules "made it really difficult to maintain a relationship".

Meanwhile, other reports said their split came down to the pair's 13 year age gap.

"Pete is 28 and Kim is 41 — they are just in very different places at the moment," a source told Page Six.

"Pete is totally spontaneous and impulsive and wants her to fly to New York, or wherever he is on a moment’s notice.

“But Kim has four kids and it isn’t that easy. She needs to focus on the kids.”

The source also cited that ongoing problems with Kanye, the father of Kim’s children, may also have placed a strain on their relationship, as he reportedly “tries to divide and conquer” whenever she is with anyone else.

Kim and Pete's alleged break up comes ahead of the former Saturday Night Live star's The Kardashians debut on the second season of the family's new Hulu show.

Kim's new romance with the 28 year old had been teased on the most recent season, and Pete's thought to be making an appearance in season two.

One hilarious scene from the trailer shows Kim behind the scenes as she prepares for the Met Gala, when she walks into the room where Pete is talking to Khloe, and asks: “Babe? Do you want to jump in the shower with me real quick?”

An excited Pete is then seen tossing his phone and cigarettes on the floor as he runs after Kim.

The season will also follow Kylie Jenner as she gives birth to her second child with partner Travis Scott.

It's unclear if Pete's debut will go ahead as planned amid the reports of his split from mum-of-four Kim.