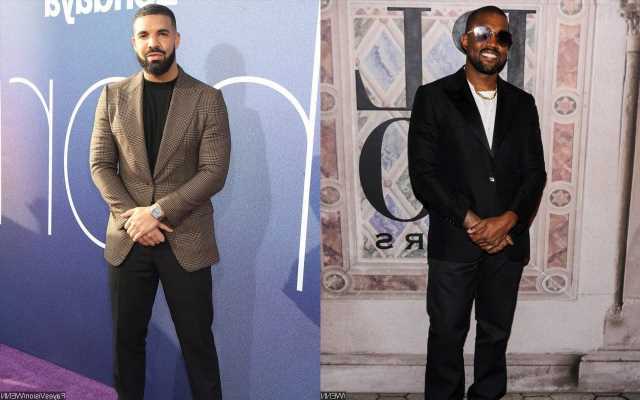 The rapper and Yeezy designer makes his public plea just a few days after he addressed his beef with the ‘Certified Lover Boy’ artist during his appearance on ‘Drink Champs’.

AceShowbiz –Kanye West is wanting to make amends with Drake. Having been feuding for years, the “Gold Digger” rapper publicly asked the “Certified Lover Boy” artist to squash their beef and invited him to share a stage at a free Larry Hoover event.

Ye made his plea through a video shared by J. Prince on Instagram. “This is Ye and J. Prince. I’m making this video to address the ongoing back-and-forth between myself and Drake. Both me and Drake have taken shots at each other and it’s time to put it to rest,” the Yeezy designer first stated in the Monday, November 8 post.

“I’m asking Drake on December 7th to join me on stage as a special guest to share the two biggest albums of the year. Live in Los Angeles with the ultimate purpose being to free Larry Hoover,” the 44-year-old emcee added. “I believe that this event won’t only being awareness to our cause but prove to people everywhere how much more we could accomplish when lay our pride to the side and come together.”

J. Prince later detailed the story of his meeting with Ye in the caption. “I met with @kanyewest last night in Htown at the Rothko Chapel. It wasn’t in my plans to meet him there but I must say I’m glad I didn’t allow a worship place for God to detour our meeting,” he explained.

“So I met with Ye to pass on the message from my brother Larry Hoover who said he would like to see peace between the two of them,” the music executive elaborated further. “Ye received this well and said thanks because he never had anyone that sat him down and explained things to him the way I did. I’m looking forward to all of us working together in unison to elevate our communities around the world.”

This arrived just days after Ye addressed his feud with Drake. When appearing on “Drink Champs”, the former insisted that he didn’t leak his nemesis’ address in August. He advertised it when he was building the house,” the estranged husband of Kim Kardashian said. “Everyone knows it. It’s like a place in Canada you go by. It’s like a monument. You can find it. That’s how I was able to find it. It’s Googleable. It’s on Google Maps.”