Vice President Kamala Harris shared a sweet new photo of her and her stepdaughter Ella Emhoff happily posing together after Ella’s commencement and told her to ‘keep dreaming.’

Kamala Harris, 56, is celebrating Ella Emhoff becoming a college graduate! The vice president and her husband Doug Emhoff‘s 21-year-old daughter, whom he shares with ex-wife Kerstin Emhoff, 54, had her commencement from The New School’s Parsons School of Design in New York City this week and she shared a joyous pic to Instagram with a sweet caption. In the photo, Ella and Kamala, who is called “Momola” by her stepchildren, including Ella’s brother Cole Emhoff, 26, are posing and smiling with their arms around each other.

The young beauty is wearing a gorgeous silver dress with belled sleeves and a purple floral pattern and the politician is wearing a maroon dress. “Congratulations to our daughter Ella on her graduation. I am so proud of you. Keep dreaming with ambition and there is nothing you cannot achieve. Love, Momala,” she lovingly wrote alongside the photo.

Just one day before Kamala’s post, Doug, 56, also took to his Instagram to share a photo with Ella all dressed up in her cap and gown, which can be seen above. “My darling Ella, we are such proud parents! We love you so much, and are very much looking forward to all you do in the future. And, to the other Class of 2021 graduates out there, huge congratulations!” he wrote in the caption.

Ella’s graduation comes while she’s in the midst of launching a fashion career. She signed with IMG Models in Jan. and made her runway debut at the Proenza Schouler at New York Fashion Week in Feb. She also appeared on her first magazine cover with Dust a week later. 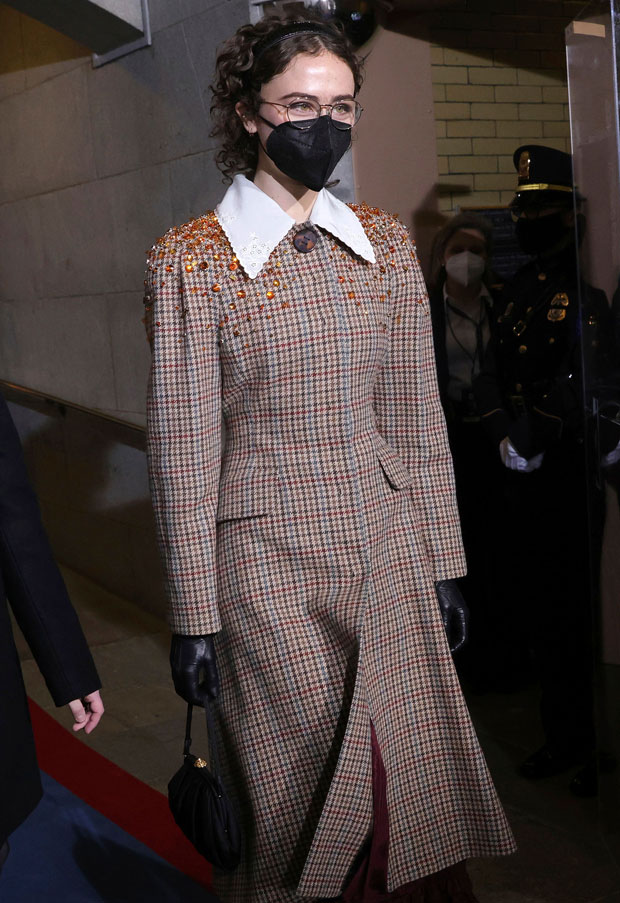 The talented model made major headlines at the 2021 Inauguration after Joe Biden was elected president and her stepmom Kamala was elected vice president. She showed up to the important event in a dress she designed with designer Batsheva Hay and they later launched a knitwear collection. In addition to gushing over her love of fashion, in interviews this past year, Ella has gushed over Kamala and her role as the first female vice president in the United States.

“It’s so empowering to see someone who’s so sure of herself and is not going to back down. What’s so important about her is that she’s super comfortable with her assertiveness,” she told Glamour about Kamala in Oct. 2020. “She doesn’t see that as a weakness, and she’s not scared. To see someone who is running like that with Joe for the highest of offices—I hope it will open up the floodgates for a lot more women and especially women of color to just run and then hopefully make it to the top. I think that we’ve needed someone like her to come along.”