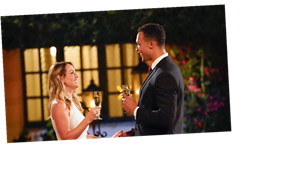 Looks like everything’s coming up roses! Kaitlyn Bristowe’s update on Clare Crawley and Dale Moss following their exit from The Bachelorette could not be more promising. “She’s so good, oh my gosh,” Bristowe told Us Weekly of Crawley on Nov. 9. “We’ve talked a few days now in a row because she’s like, ‘I can’t wait for you guys to meet him!’”

Apparently, Crawley is pumped about her future with Moss. “She’s so happy,” Bristowe said. “And it’s really cool to know that she kind of broke the rules which, we all know I’m a rule breaker and did it for love.”

In fact, Bristowe believes Crawley and Moss did their relationship a favor by exiting the show early. “Now they have such a stronger foundation to start off on instead of her dating all these men and then picking him at the end," she reasoned.

ICYMI: On the Nov. 5 episode of The Bachelorette, months of rumors were confirmed when Crawley and Moss did, in fact, make Bachelor Nation history by getting engaged and leaving the show only four episodes into the season. That same day, Crawley posted a picture from their engagement along with other pictures of them from their brief time on the show alongside the caption, "It’s official!! Love wins!!!! ?❤️!!! I love you @dalemoss13 !!!!"

For his part, Moss posted a similar series of photos alongside the caption, "Never a point I won’t show up for you @clarecrawley ? ?."

Crawley’s decision to break with tradition and exit the show early wasn’t an easy one and she’s apparently gotten some major backlash for it. “She has been put through the ringer and I think anybody who’s been on the show — and the two of you can relate to this — it is hard,” DeAnna Pappas told Ashley Iaconetti and Ben Higgins of Crawley’s experience during a Nov. 2 appearance on their Almost Famous podcast. “She’s just been put through the ringer and the things that people are saying about her and about her life and stuff online can just be really hurtful. I just feel bad for her because I feel like in a period of time where this should be really joyful for her and this should be a really great experience and probably one of the most exciting things that she will go through, it has not been that for her.”

Glad to hear from Bristowe that she’s hopefully transitioning to a happier place!