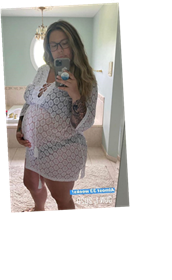 As far as we know, controversial MTV and social media staple Kailyn Lowry is still pregnant with her fourth child.

But a surprising number of Teen Mom 2 fans are convinced the reality star has secretly given birth.

It’s not clear why so many people believe Lowry already had her baby, but the rumor has been spreading like wildfire this week.

It doesn’t help that Chris Lopez, the father of Kail’s son Lux and the boy soon to be born, accused Kailyn of hiding her baby.

It seems like Lopez was just doing what he does best: trolling.

But since the theory had already taken hold at the time he made his comments, many were quick to assume he was an aggrieved dad speaking his truth.

Not sure what the truth even is when you’re just a habitual pot-stirrer whipping up a fresh batch of drama because you’re bored … but we digress.

Anyway, his comments only encouraged fans in their search for clues regarding Kailyn’s impending birth.

And many believe they found what they were looking for in this photo of Kail’s ex-husband, Javi Marrroquin:

It may seem like an innocent photo of a poolside hangout, but the presence of Kail’s kids led some to the conclusion that Kail has officially become a mother of four.

“Kail must’ve had the baby if Javi is babysitting for her,” one commenter wrote.

Pretty flimsy evidence (and we use the term loosely), but it caught her attention.

That particular comment didn’t go unanswered for long, as Kail was quick to clap back:

“I don’t need Javi to babysit for me. But that was a cute assumption,” she replied.

Demonstrating that she has not lost her sense of humor amid this difficult pregnancy, Kail later added:

“You know I can’t help it on here,” along with a string of laughing emojis … and we suppose it is pretty funny.

All joking aside, it’s important to bear in mind that this has been Lowry’s most difficult pregnancy.

She’s described herself as “at risk” multiple times over the past nine months.

The possibility of excessive blood loss during delivery has reportedly become a real concern among Kail and her doctors.

So if her sons are currently living with Javi and Lauren Comeau, it may be for good reason.

Kail could’ve been instructed to remain in bed during the final days of her pregnancy.

If that’s the case, then the last thing she needs is a persistent, inaccurate internet rumor causing her undue stress.

So it’s possible that she really has welcomed her fourth child, and she’s decided to hold off on making an announcement.

For whatever reason, that’s also her prerogative if she chooses to keep this news close to the vest, and she might have very good reasons (health, personal, business) for not going public.

At least just yet.

This is one of those times when it’s important to bear in mind that even though she’s a reality star who uses her platform for attention and monetization, Kail still has a right to privacy.

Since she just endured or is currently enduring a very difficult pregnancy, it’s more important that while celebrity gossip sites and fans speculating about her is fair, there are boundaries.