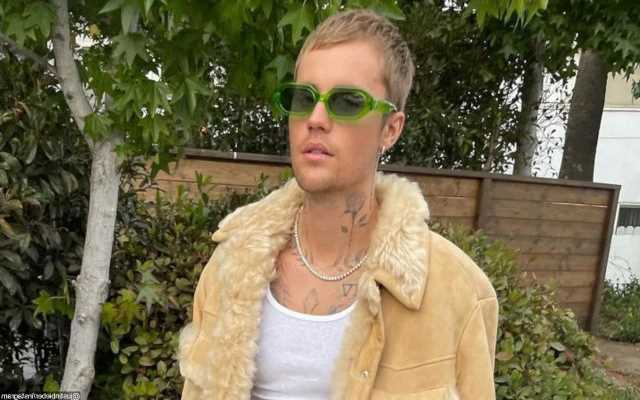 Crews start to set up a billboard of the ‘Love Yourself’ singer’s new Balenciaga ad on Los Angeles’ Sunset Strip, but it ends up with a hilarious mixup with an ad for Kim Kardashian’s SKIMS.

AceShowbiz –Justin Bieber actually will be a good option should SKIMS need a new model. On Monday, August 31, crews started to set up a billboard of the “Sorry” singer’s new Balenciaga ad on Los Angeles’ Sunset Strip, but it ended up with a hilarious mixup.

The crews successfully put Justin’s face and part of his torso in the top half in the the billboard. As it seemed like it took time to replace the bottom part, the billboard saw a hilarious mash-up considering the bottom part still showed the picture from the previous ad which was an ad for SKIMS.

In the SKIMS ad, the bottom part featured the legs of a SKIMS shape wear model wearing nothing but a pair of grey underwear and crew socks. Thanks to the faux, the billboard as a whole pictured as if Justin wearing SKIMS underwear.

The snap of the funny ad quickly made rounds on the Internet with Jacob Elordi joining the fun. The actor took to his Instagram Stories to share a picture of the mishap. Later, one Twitter user commented, “I’m so sorry for laughing but this is way too funny,” alongside a screenshot of the “Euphoria” star’s picture. Another person joked, “Justin Bieber for Skims Balenciaga is the happy accident you could only wish for on a Monday drive home.”

“Justin Bieber for Skims Balenciaga is the happy accident you could only wish for on a Monday drive home,” another tweet read.

Thankfully, the billboard ad in the Andaz hotel has been fixed. The bottom part has now been replaced with a picture of the “Peach” singer rocking a pair of black sweatpants and running shoes.

Neither Justin nor SKIMS founder Kim Kardashian has commented on the hilarious mishap.