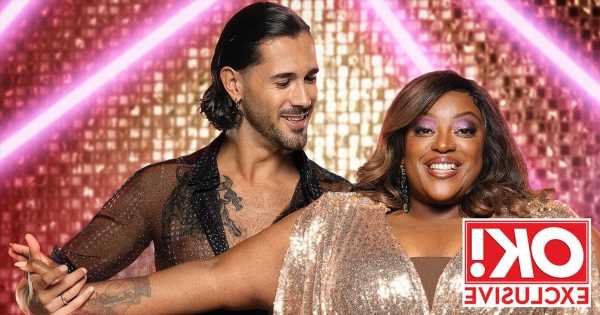 Reflecting on her stint on the hit show, Judi, 42, has said that the programme worked wonders for her confidence,, and she's felt "happier and healthier" since taking part.

Writing in her OK! column, she said: "Strictly is back on our screens, baby! The first week is set to kick off to its usual incredible start and I just want to wish a huge congratulations to all the contestants taking part this year.

"I’d love to tell you that it gets easier every week… but that’s just not true.

"What I can promise you however, after taking part last year, is that I felt happier, healthier and more confident than ever – not to mention the pounds we all dropped!"

Judi was the fifth contestant to be eliminated in the series which saw Bill Bailey take the trophy with his partner Oti Mabuse.

She added: "I also want to give a special shoutout to my former Strictly partner Graziano – he’s going to do a wonderful job with his new partner Kym [Marsh] and she’s very lucky to have him as her instructor – as well as my Loose Women sister Kaye [Adams], who I know is so excited for the journey ahead!"

Kym is best known for starring as Michelle Connor on Coronation Street until 2019.

Speaking about why it means so much to her to compete on Strictly, Kym revealed she wants to "make the most" out of every opportunity since her dad was diagnosed with incurable prostate cancer.

She told MailOnline: "Since he was diagnosed last March I've just decided to grab everything while I can.

"Without being melancholy, we don't know how long we've got him for, so you've got to make the best of these situations."

Kym explained further: "My dad's diagnosis does change things. He's been telling me for years, ''You never know what's around the corner, so grab things with both hands.'"

In June 2021, Kym announced the sad news that her father David, 77, had been diagnosed with cancer after he delayed seeing a doctor during lockdown. The cancer spread to his pelvis, spine, ribs and left leg.

Kym also said that she is doing Strictly "for all the grandmothers out there" after welcoming her second grandchild this year.

Her son David Cunliffe, 26, and his fiancée Courtney welcomed a baby boy in August after her daughter Emilie gave birth to her son.

Dr Xand van Tulleken said to Kym on BBC Morning Live: "I believe it's true that a grandmother has never won Strictly before so you could be a pioneer!" to which an excited Kym replied: "I'm doing it for the grandmothers out there."