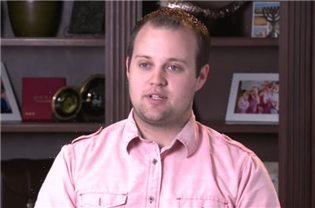 Josh Duggar is hoping for a legal miracle.

On June 3, lawyers for the disgraced reality star officially filed paperwork to appeal their client’s conviction on one count of child pornography possession.

The filing states that Duggar “hereby appeals to the United States Court of Appeals for the Eighth Circuit from this Court’s Judgment in a Criminal Case.”

It goes on to say that “Duggar respectfully provides notice of his intent to evaluate and pursue any and all meritorious arguments in his appeal.”

The father of seven was found guilty on December 9 of illegally downloading sexually graphic material — photos and videos of children under the age of 12, many of which involved sexual assault.

He was sentenced on May 25 to 151 months in federal prison.

Even after his eventual release, Duggar will be banned from using the Internet outside of work; banned from ever viewing pornogrraphy of any kind; and also banned from spending unsupervised time with any minors..

Including his own children.

The day before he was sentenced, Duggar was denied in court when he asked a judge to order a retrial… or to reverse the jury’s decision and acquit him on all charges.

At the time, Duggar’s attorneys had argued that the government did not disclose its evidence against Duggar in a timely manner and that there was a lack of evidence that Duggar actually viewed the pornography found on his workplace computer.

However, the judge rejected those claims.

He said the evidence Duggar’s defense lawyers refer to was “not material” to the defense and that “ample evidence” overall was provided during the December trial to prove Duggar’s guilt.

As we type, Duggar is being held in the Washington County Jail as he awaits transfer to a federal detention center.

Neither he nor his wife nor his parents has spoken out on last month’s conviction, although both Michelle Duggar and Anna Duggar wrote letters ahead of Duggar’s sentencing, urging the judge to limit his time in jail to a mere five years.

In the end, Josh was sentenced to more than twice that.

Even with good behavior, he must serve 85 percent of this sentence… which amounts to over a decade behind bars.

“In my opinion, Judge Timothy L. Brooks was fair in his ruling giving Josh a sentence that would be considered below the median for the crimes he has committed,” Jason Duggar wrote in a lengthy statement shared to his Instagram Story today after his brother was sentenced.

Continued this Duggar’s response to the ruling:

“My heart is grieved over the choices my brother has made, his actions do not reflect that of a Christian believer and have doubtlessly defamed my Lord and Saviors name!!

“Joshua’s poor decisions have greatly effected those around him, in particular his wife, seven children and our family as a whole.”

Overall, however, Jason said he can’t turn his back completely on a relative.

“With that said, I will never stop loving my brother, regardless of what he does, just as my savior has forgiven me so I have forgiven my brother of his wrongdoings!” he concluded.

“My prayer is that God will use this circumstance to truly humble him and bring about a true change in his life!”