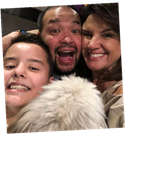 Jon Gosselin is hoping his entire family can get together for the holidays this year.

On a related note, we would like a million dollars, a mansion in the Bahamas and a whole bunch of puppies.

What? This is just as a realistic of a request.

Indeed, not long afterr Kate Gosselin said she would be hosting Thanksgiving for only six of her eight kids, an insder has told In Touch Weekly that Jon wants to aim higher.

Forget the fact that he and his ex-wife are at extreme odds.

Forget the fact that he only speaks to daughter Hannah and son Colliin.

Forget the fact that Kate has allegedly talked to one of her sons for just 90 minutes total over the past three years.

Jon Gosselin and girlfriend Colleen Conrad reportedly “hope” Collin and Hannah — who have been living with their dad for the past two years — “get to see their other siblings” on Thanksgiving this Thursday.

We think there’s a better chance of

“Colleen is always encouraging it, and Jon isn’t opposed to it,” this source says to the aforementioned tabloid, adding:

“That would really make the holidays special. Everyone is keeping their fingers crossed.”

They can cross their fingers as tightly as humanly possible and pray to whatever gods they wish to pray to… this isn’t gonna happen.

Just two-plus months ago, Jon was accused of assaulting Collin.

He has staunchly defended himself against this heinous allegation, but ex-wife Kate has spoken to People Magazine on multiple occasions and not accepted any of Jon’s excuses.

He only put Collin in a restraint? Meant to keep him from running away?

“Enough is enough,” she told People, referring to Jon as violent and abusive and saying she doesn’t want her kids anywhere near him.

Hence why we somehow doubt the parents will agree to put their differences aside and to arrange for all the children to gather together.

Not even for the holidays.

As for their Thanksgiving meal?

“Jon and Colleen will gather all the kids for a big traditional spread,” the insider adds, somehow knowing their exact plans and adding;

“Hannah will help Colleen and her daughter Jordan in the kitchen, with Jon, Collin and Jesse, Colleen’s son, regulated to setting the table and clean up duties.”

Kate, for her part, will have a “last Thanksgiving in her family home” after selling her Pennsylvania property, a separate source told In Touch, explaining of the get-together:

“It’s going to be bittersweet.”

It may also be a tad bit sparse, in terms of what’s available to eat.

“She’s not working, so there are no checks coming in,” the In Touch source continued.

“It costs a lot of money to care for the kids and the lifestyle she’s been accustomed to.

“Having a hit TV show had a lot of perks. Things have definitely changed. That’s why she’s looking to sell her home.”