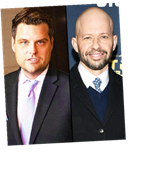 You may have heard this at some point over the past several God awful months, but it really must be emphasized again:

And never has this ongoing year seemed more wasted than on Saturday afternoon… when former Two and a Half Men star Jon Cryer went at it on social media with Florida Representative Matt Gaetz.

The unexpected Twitter rivalry appeared to ignire due to one of Cryer’s posts, in which the actor showed support for Florida’s Democratic candidate Phil Ehr.

The actor tagged Gaetz in his tweet and wrote:

“Rep. @mattgaetz invited a white supremacist to the State of the Union, attempted to intimidate a federal witness, and endorsed a sociopathic bigot who applauded the deaths of migrants for congress.”

Gaetz, an ardent and outspoken supporter of President Donald Trump, did not let these slights go unnoted.

“Charlie Sheen totally carried two and a half men,” Gaetz replied shortly after, to which Cryer clapped back:

“Is that why, after he left, it lasted for 4 more years and I won an Emmy for Best Actor in a Comedy?”

.And it didn’t even stop with these jabs.

“What’s an Emmy? An award Hollywood gives itself? I win elections,” Gaetz fired back, adding:

“Well if you do see the show, watch the early seasons.”

As television fans likely recall, Two and a Half Men debuted in 2003 and centered around Charlie (Sheen), Alan (Cryer) and his nephew Jake (Angus T. Jones).

The series was a monster hit for CBS.

However, it was brought to a screeching and very public halt at the end of season eight following Charlie Sheen’s public meltdown… which led him to check into rehab 2010.

The following year, the actor was fired from Two and a Half Men after he attacked the creator, Chuck Lorre.

Ashton Kutcher was brought in to replace the troubled star after Sheen’s character was killed off.

Cryer, meanwhile, wanted to make it clear he was never hurling any shade at Sheen in his feud with Gaetz.

“And FWIW, this wasn’t meant as a slam on Charlie. He was undeniably the star of the show. And a fantastic actor. Despite his issues, we had many more highs than lows,” Cryer wrote.

“But you can’t say he ‘carried’ a show that lasted four years without him.”

So there you have it.