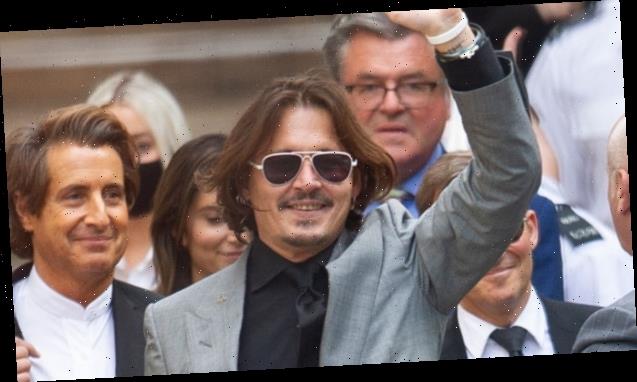 Johnny Depp used an unusual setting to accept an award from a Polish Film Festival. He held the trophy while standing behind jail bars at his home in the Bahamas.

After being dealt some major personal and professional blows in 2020, things seem to be ending on a brighter note for Johnny Depp. The actor just accepted an award from the Polish EnergaCamerimage Film Festival, and decided to show off holding his trophy in an usual setting. Since he was unable to travel to Poland due to COVID-19 restrictions, he posed with his trophy for being an “actor with unique visual sensitivity” from his home in the Bahamas. He apparently has a makeshift jail cell there that looks like it could have come out of a Pirates of the Caribbean movie set.

The 57-year-old actor was seen in a Nov. 21 photograph tweeted by the film festival behind some iron bars, while resting the trophy on an apparent food tray delivery slot in the bars. He had a big smile on his face while pointing to the award with his left hand. Johnny sported dark aviator shades, and a colorful scarf over his head, which appeared to be covering up platinum blonde dyed locks.

The superstar was sporting a dark mustache and slight chin beard. He wore a blue and black striped shirt unbuttoned nearly to his waist. It showed off his tanned skin, and Johnny went light on his usually excessive jewelry habit, He wore just a few rings on his singers and one small silver necklace around his neck.

It was the first sighting of a smiling Johnny since his double blow of losing his highly publicized libel case against the publisher of Britain’s The Sun newspaper on Nov. 2, then being asked by Warner Bros. film studio to leave his role of Gellert Grindelwald in the Fantastic Beasts franchise later that week.

“I wish to let you know that I have been asked to resign by Warner Bros. from my role as Grindelwald in Fantastic Beasts and I have respected and agreed to that request,” Johnny wrote in short statement via his Instagram account on Nov. 6. He also thanked fans for their “support and loyalty.”

The actor also added that he would be appealing his libel lawsuit against News Group Newspapers and The Sun‘s executive editor Dan Wootton, where the paper had claimed he was an abusive husband towards ex-wife Amber Heard, 34, by calling him a “wife beater” in a 2018 article. “The surreal judgement of the court in the U.K. will not change my fight to tell the truth and I confirm that I plan to appeal,” he added in the statement, noting, “My resolve remains strong and I intend to prove that the allegations against me are false. My life and career will not be defined by this moment in time.”