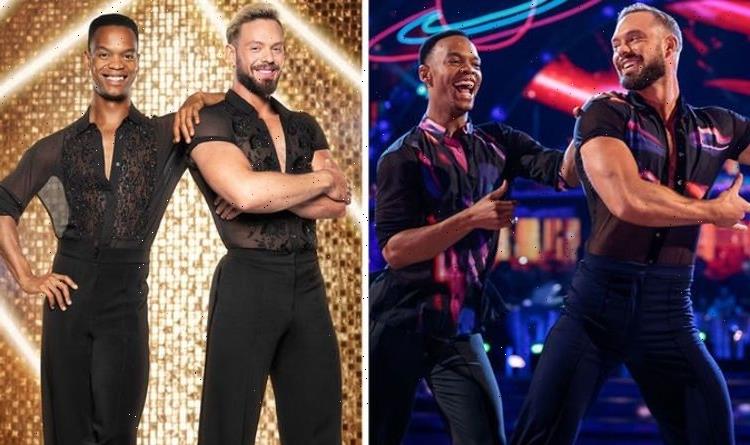 Strictly Come Dancing star John Whaite and his dance partner Johannes Radebe have “great synergy,” a body expert has said after watching the pair in action on the BBC ballroom dancing competition. The couple are “very strong contenders” for the trophy, he went on to add.

He said their positive facial expressions and gestures, as well as their body language, denoted a “great energy between them”.

He went on to say that moments of “tactile touching” between the pair spoke of the “emotional rollercoaster” they are on.

John and Johannes are the first all-male couple to compete in the show since it premiered in 2004.

Stanton, speaking to Betfair Casino, said: “There were lots of hugs, lots of tactile touching in just a few moments which is very telling and shows they’re on an emotional rollercoaster.

“It’s all positive and it suggests there is a good rapport with each other.

He went on to say they had the potential to go all the way and win the contest.

Last week, John and Johannes impressed the judges and viewers at home with their Pirates of the Caribbean-inspired Paso Doble for Movie Week.

They were awarded an almost perfect score which placed them at the top of the leaderboard.

Taking to Instagram earlier this week, John thanked fans for their love and support after preparing himself for some hateful comments as one half of the first male pairing.

“I can’t tell you what all the kind comments, messages and little chats in the street mean to me.

“When I agreed to dance on @bbcstrictly with another chap I was of course excited, but ready for the flak.

“As queer people we have to carefully choose the places we go, the people we speak to, and live our life somewhat blinkered to keep ourselves safe,” he wrote online.

The post continued: “But this process has taught me that there is far more love in the world than there is hate. So much so that any messages of hate have been diluted to complete insignificance.

“And, as I’ve said from day one, if even just one child watches us and feels instantly more comfortable in their own skin and more accepted by the world, then it’s all a great step forward.

“Much love. Now back to learning this American Smooth Foxtrot with @johannesradebe.”

Strictly Come Dancing continues tonight at 7pm on BBC One.