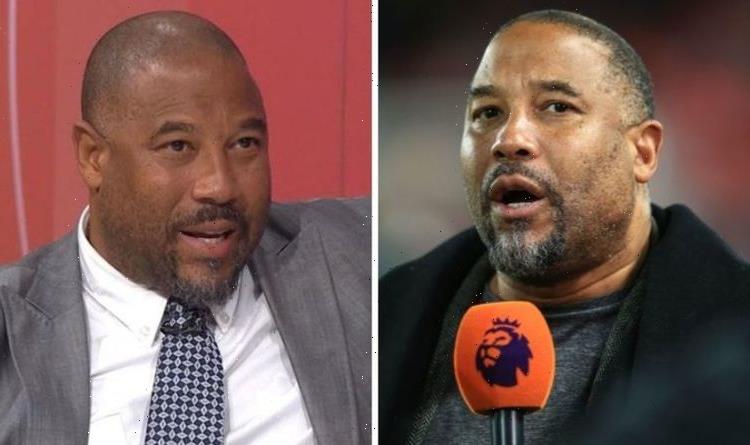 Liverpool legend John Barnes is one of the finest footballers to have played for England in the last 50 years. The Jamaica-born winger enjoyed a stellar career, scoring 108 goals for the Anfield side in more than 400 appearances, as well as 79 caps for his country. Away from the pitch, Barnes’ rap in New Order’s ‘World in Motion’ topped the charts and has become an iconic part of English football culture in its own right.

He has also become a regular on our TV screens too, starring in Strictly Come Dancing, Celebrity Big Brother and he appears tonight on Michael McIntyre’s The Wheel.

During an appearance on BBC Question Time in February 2019, he accused the “average person” of not understanding the ramifications of leaving the European Union.

Barnes, who admitted prior to the Brexit referendum that he would be voting to remain within the bloc, sought to clarify his comments.

He added: “You think not understanding the ramifications from an economic point of view means that you’re thick?”

Ms Whelan said Brexit and its impact had been discussed “at nauseum”.

She told the show’s panel: “I think Brexit is the best thing that has happened to British politics because it has thrown up so many questions.

“The idea that the average voter doesn’t understand it is where the kind of elitist anti-democratic politics the new party group comes from.”

Twitter user Gary Ace defended Barnes’ comments. He said at the time: “John Barnes was right, the average voter does not understand as much about the ramifications of Brexit as the experts warning against it.

“I don’t know why that was so shocking to say? For example, the average person has teeth but it doesn’t mean they are dentists.”

Barnes was joined on the panel by Chris Leslie, a former Labour minister who had split from his party that week to form The Independent Group — a union that was later renamed Change UK.

Barnes said: “I think Chris and his colleagues should be commended in taking a stand for what they believe.

“I think they should be commended because too many politicians aren’t really showing their true colours and I think on an issue like this [Brexit], as much as we’re talking about going through with the will of the people, if they feel like it’s not the right thing for the country, I think they should stand up and say so.”

Barnes had previously admitted, in a 2016 comment piece in The Guardian, that he “could have supported a vote to leave” if the Leave campaign was based around our sovereignty.

Instead, he argued much of the campaign was based on immigration, which encouraged him to think otherwise.

He wrote: “Leave is preying on people’s fears, telling the same story we’ve heard over the years about black people from Africa and the Caribbean coming to steal our jobs.

“Now we hear the same thing about Poles.”

He added: “And when politicians talk about welcoming different, more skilled immigrants — who are they talking about anyway?

“If there were thousands of blond-haired, blue-eyed Americans landing at Dover, seeking refuge, I think many of us would be straight down there to help.”

Though he stressed he was not accusing anyone of being racist, he explained that a campaign focusing on immigration suggests “those other arguments don’t hold enough strength to support an out vote”.

Ultimately, Barnes did not get his wish. The UK voted by 51.9 percent to 48.1 percent to leave the bloc.

John Barnes appears on Michael McIntrye’s The Wheel tonight at 8:30pm on BBC One.