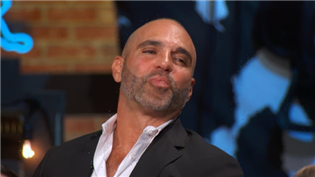 The family confrontation on the RHONJ Season 12 Reunion was so heated that Andy Cohen had to make Teresa apologize.

Teresa’s insults towards Joe Gorga left their mark, causing him to storm off of the stage.

What’s more is that Joe declared that he “quit” the show, clearly being tired of the endless drama.

But after all of the apologies and coaxing, did he change his mind? Have we really seen the last of Joe?

She and Teresa Giudice both went after him, attacking his masculinity with demeaning insults.

Why? Because he defends his wife. They don’t like him, so they weaponize toxic masculinity to try to shame him for being a good husband.

The implications go beyond Joe, implying that any of the men on the show — on any of the shows — who participate are somehow “less” manly.

It’s a twisted implication, and based upon antiquated and extremely unhealthy ideas about gender that haven’t been mainstream in generations.

Joe corrected Jennifer, telling her that putting his wife on a pedestal is part of what makes him a good man.

Jennifer repeatedly calling Joe a “bitch boy” was bad enough, but it was Teresa that really set him off.

He stormed backstage, and only when Andy demanded that Teresa go make nice with him did she try — sort of — to smooth things over.

Since the Reunion, Joe has explained how insulting he found Teresa’s hypocrisy to be.

Luis Ruelas has, after all, been a hot topic and engaged in numerous on-screen conversations.

“But he’s not a bitch for doing this on national TV?” Joe asked on a recent podcast interview with his wife.

But Teresa has defended herself as well, claiming that she was merely answering questions.

On screen and off screen, she has been adamant that she did not insult or put down her brother.

But, as Andy pointed out backstage, Teresa doesn’t get to tell Joe when he’s been insulted.

Joe actually “quit” much earlier this season after a miserable confrontation with his niece, Gia.

While some extremely weird people thought that it was inappropriate for Gia to stand up to Joe (because of their age or because they were relatives — that was never clear), they came to a decent resolution.

However, Joe was so rattled by how hurt Gia had felt by what he’d said about her father that he quit filming the show for a few weeks.

That said, there are no indications right now that Joe has quit the show for good this time.

There are also no indications that he will return for Season 13.

If he quit, what would that mean for Melissa? For Teresa? Joe could be the first domino in a major casting shakeup … or maybe he just needs time to cool off.

A casting shakeup seems unlikely, however, because this particular show did not suffer the same way that a few of the others in the franchise did in recent years.

In New York and in Orange County, a combination of bad luck and the COVID-19 pandemic sent ratings down — because the public places are so essential to the show’s character.

One of the advantages to filming in New Jersey, one might joke, is that you know that viewers are there for the cast, not the backdrop.