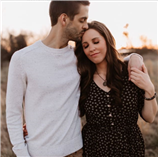 Earlier this month, Jill Duggar revealed that she had suffered a miscarriage.

This heartbreaking loss has hit her and Derick, and she is sharing her grief on social media.

Jill is also sharing how she is coping.

Her most recent update shows a “bottle of tears,” a gift to help her feel a little less alone.

Jill Duggar spoke to her fans and followers, reminding them that no one is “alone in [their] pain.”

She has apologized for being relatively inactive in recent weeks on social media — something that we can all more than understand.

“I haven’t been keeping up much on here,” she acknowledged.

“But,” Jill wrote, she “wanted to share another gift that a friend sent.”

This was a gift “that blessed me so much today.”

The gift in question was included in a photo, a blue “bottle of tears.”

“This is a small token of hope to remind you that you are not alone,” the inspirational message read.

“There is purpose in your pain,” the note continued.

The note added: “God sees you, God loves you, and your story is not over.”

After sharing the news that they had suffered a miscarriage, Jill and Derick revealed their would-be child’s name.

They decided to name their lost baby River Bliss.

“Our baby doesn’t get to live here with us on earth, but is forever with the source of the river of life, in the presence of the Lord!” Jill wrote.

“And we chose Bliss for a middle name because our baby is living in perfect bliss with the Lord,” Jill explained.

“And was such a gift that brought immense joy and happiness to us,” she added.

Jill wrote that this was the case “even though only with us here on earth for a short time.”

One does not have to share Jill’s particular religious background to grieve a miscarriage.

This kind of loss can hit home for someone of any faith or someone who is not religious at all.

However, Jill’s beliefs and those of her extended family can further complicate their grief.

Within the fundamentalist beliefs of the Duggar world, having many children is a source of pride.

In addition to a display of virility and material success, it is at times seen as a sign of divine favor within their subculture.

There is an obvious implication within those beliefs — that miscarriages or failure to conceive are signs of disfavor.

We know that Michelle and Jim Bob have inaccurately blamed one previous miscarriage upon birth control.

Those of us who are not members of a fertility cult also understand that miscarriages are normal, many happening before people realize that they’re pregnant.

Jill has distanced herself from some of her parents’ more extreme beliefs, but upbringings like hers are not easily shaken.

Something much more common within Christianity that can make this hard for Jill and Derrick is their belief in purpose.

Because they believe that things happen according to a divine plan and divine will, this (and all) miscarriages are intentional.

At the same time, however, their beliefs bring them comfort.

Jill and Derick believe that, spiritually speaking, a fetus is a complete person — not in body, but in soul.

Due to this ideological premise, they believe that River’s soul is now enjoying everlasting reward in the Christian afterlife.

In fact, they expect to be reunited (or, arguably, united) upon their own deaths when they enter that same afterlife.

We do not have to share all, or even any, of Jill’s beliefs in order to feel for her in her grief or understand how she is processing this.

We hope that their family can process this grief and heal in their own way.

Loss is traumatic. Our thoughts go out to the Dillards and to all people and families who have gone through this.