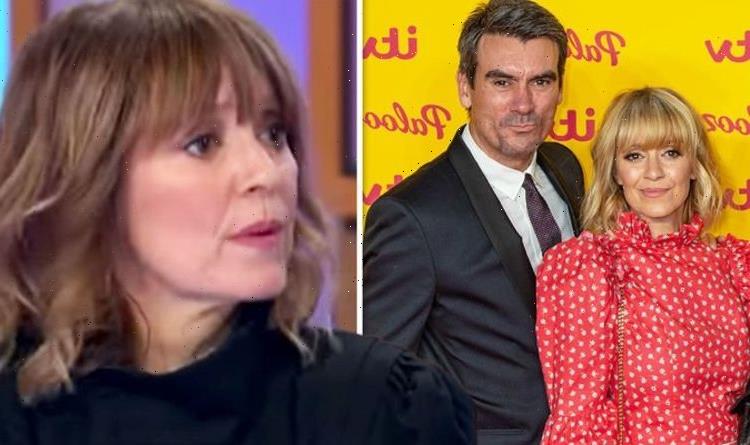 Emmerdale stars Zoe Henry, 47, and Jeff Hordley, 51, have unfortunately faced some problems at home today, which required a “big tidy up”. Zoe, who plays Rhona Goskirk in the ITV soap, took to Twitter to share the couple’s struggles this evening, after spending some “time away”.

The actress and the Cain Dingle star had been enjoying a well-earned summer break from their busy filming schedules.

Upon their return, Zoe shared a selection of photos from the pair’s beloved allotment in view of her 103,000 followers.

The actress then detailed her and Geoff’s devastation after discovering they might have blight, which is a plant disease.

The disease is most commonly caused by fungi such as mildews, rusts, and smuts, and can wreak havoc in gardens.

The Emmerdale stars are keen gardeners and enjoy showing off the fruits and vegetables they have successfully grown on social media.

The first snap Zoe posted showed a selection of freshly picked fruits and vegetables alongside a portable radio.

The couple’s dog Ronald was pictured relaxing in a pile of netting in the second photo, which was also taken in their garden.

Zoe wrote alongside the pictures: “Big tidy up today after some time away…the green tomatos have been picked because we think we may have blight.”(sic)

The soap star then added a series of angry face emojis, before quipping that their dog wasn’t very helpful in the situation.

Fans and celebrities took to the comments section of Zoe’s post to share their thoughts on the issue.

The couple’s Emmerdale co-star Samantha Giles, who is best known for portraying the role of Bernice Blackstock, suggested a resolution for their tomato problem.

She penned: “I just made a load of green tomato chutney xx.”

Emmerdale scriptwriter Sharon Marshall then chimed: “Been doing this one for the last four years, switching to apple cider vinegar.. Make now, leave til xmas and it’s [love heart emoji].”

“Oooo lovely Sharon,thank you!!” Zoe responded, after checking out the recipe.

Another Twitter user commented: “You’re not in your own with blight, I lost 9 plants, 5 left, keeping my fingers crossed these are ok, however my green toms are ripening nicely, hope yours do too.”

Zoe wrote back: “Oh no! It’s so upsetting after all that hard work and waiting. Seems theres lots of it about this year!”(sic)

A second fan said: “It all looks fantastic, think the dreaded blight has hit most this year, I lost all my outdoor toms a few weeks ago, so frustrating.”

Zoe then admitted: “To be fair, this is the first time we’ve ever had it, in 14 years of growing. Frustrating though!”

A third fan penned: “Ronald is super cute…I hope you have all enjoyed your break x.”