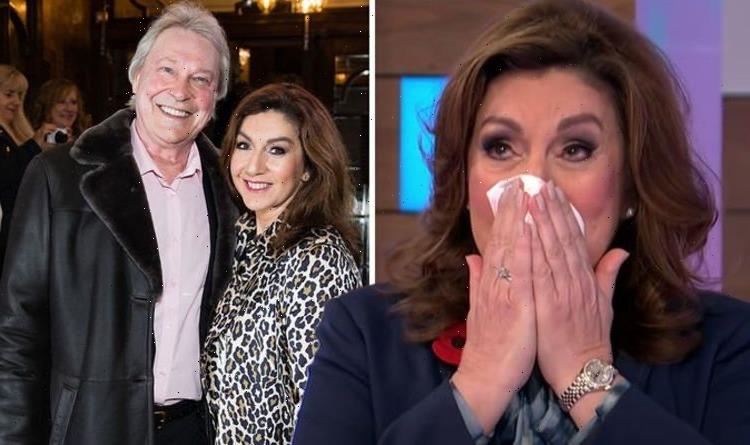 Loose Women: Jane McDonald opens up about coping with grief

Jane McDonald, 58, has revealed she has now decided against retiring due to the heartbreaking death of her fiancé Ed Rothe. The iconic cruise ship singer admitted she had initially planned on retiring at the end of the year, but her grief over Ed has changed her mind.

Speaking in an emotional interview on ITV’s Loose Women yesterday, Jane said: “I was supposed to be retiring at the end of the year.

“But it’s been the only thing that I know what to do.

“It’s been my healer being out with the fans and I thank them so much for everything that they’ve done for me, and Wakefield Hospice, obviously, as well.”

The Wakefield Hospice took care of Ed in his final days while he battled lung cancer.

The star continued: “But that’s the only thing I know what to do, so I’m going back and doing another travel show.

“I’m going to the Caribbean, it’s terrible isn’t it, that?” She joked, prompting laughter from her Loose Women co-stars.

Jane added: “So I’m doing that for Channel 5 again, a new travel show, and then I’m doing Yorkshire.”

The singer went on to admit that people have questioned her decision to embark on an arena show at Christmas, as it will mark her first festive season without her partner.

However, Jane insisted that she’s determined to make this Christmas “the best” after dealing with unimaginable heartache last Christmas amid her other half’s health struggles.

The star admitted: “I’ve got my Christmas arena show, because that’s another thing everybody’s saying, ‘Oh but it’s Christmas, your first one without Ed’.

“And I’m thinking, ‘no, last Christmas was the worst that I could have ever experienced’.

“And now I’m going to have the best Christmas with all my fans in Leeds Arena.”

Jane had previously announced that she was quitting her Channel 5 Cruising show in 2020.

She said at the time in a statement on her website: “It has been a privilege to call this a ‘job’. After so many years filming abroad I am looking forward to some much needed time in the UK and to focus on my music and tours and exciting new projects.

“Thank you Channel 5 for some great trips and many fabulous memories.”

However, she has now had a change of heart.

Jane also told the Loose Women panelists that she had to have a crash course in nursing to care for her dying fiancé Ed during the coronavirus lockdown.

Jane revealed: “I had to have a crash course in nursing. Ryan, the lovely district nurse, – thank you Ryan – came and showed me how to do everything.”

The star explained “no one was allowed” to care for The Searchers musician because of Covid concerns.

She added: “Because it was lung cancer, they were so afraid of him getting Covid that I took over everything.”