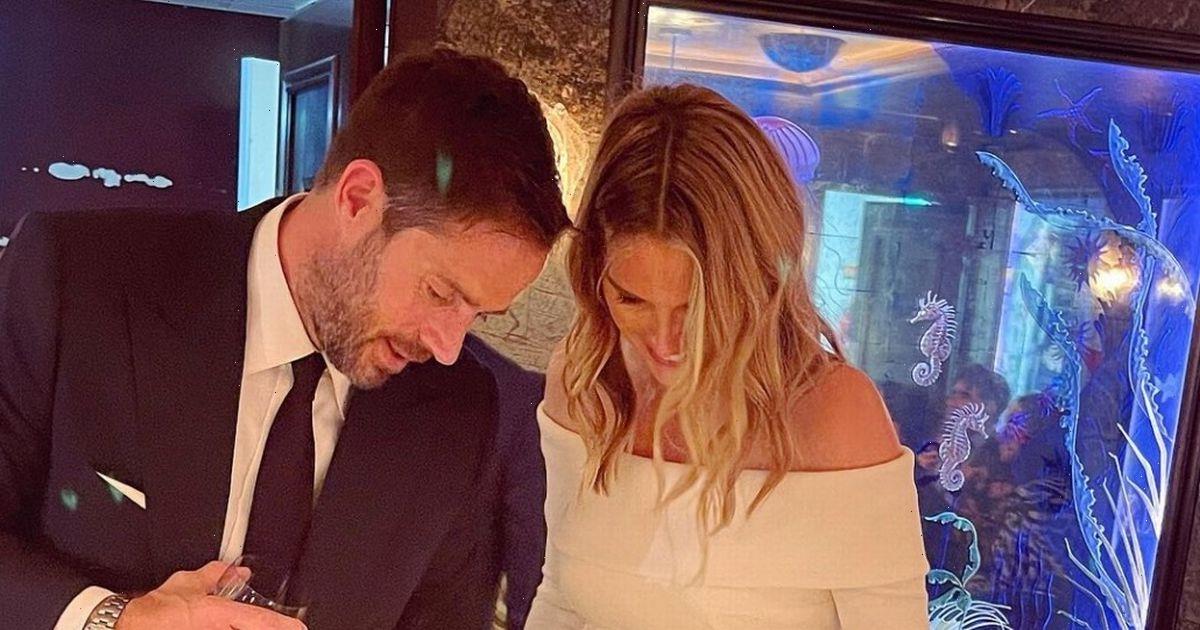 Jamie Redknapp has broken his silence on his "intimate" wedding to Frida Anderson-Lourie, after the pair were snapped leaving Chelsea Registry Office earlier this month.

Football pundit Jamie, 48, tied the knot with Swedish model Frida, 38, in a small ceremony surrounded by a select few close friends and family on Monday 18 October.

Now, as he settles into life as a newly-wedded man, Jamie has spoken out about his special day.

Jamie shared a series of black and white snaps from his nuptials to Frida, who is pregnant with the couple's first child together, on his Instagram page.

He then told his 1.4million followers in the caption: "We wanted to share some moments from our special day . It was a very small intimate wedding with friends and family.

"Thanks so much for all the kind messages" followed by a red heart emoji.

Later, Jamie posted a photo of himself with his two sons Charlie and Beau, who he shares with ex-wife Louse Redknapp and gave a nod to his "Best Men" in the caption.

Jamie and Frida's wedding day came as a surprise to fans as they were spotted leaving Chelsea Registry Office earlier this month.

Amongst those who were surprised was Jamie's ex-wife Louise, who was said to be "shocked" by the nuptials.

A source told OK! shortly after news of Jamie's wedding broke: "Louise was quite shocked, she only found out very recently. They kept it very under wraps, nobody even knew they were engaged.

"It's very mixed emotions for her, it's difficult because she's spoken quite openly about her regret. She's blamed Strictly quite a lot but, unfortunately, you can't turn the clock back."

The source added that Louise was only informed of the nuptials because Jamie wanted their sons – Charley, 17, and Beau, 12 – to enter Kensington and Chelsea Register Office with him.

"He wanted his sons to walk in with him but it was a very small affair," they continued. "She only knew because the boys were there.

"She didn't have a lot of time to prepare because Jamie just wanted to be married before the baby was born. He was desperate for them to be man and wife before."

Jamie and Louise were married from 1998 until 2018. Louise is now said to be "struggling with regrets" following Jamie's wedding to Frida, who has four children with hedge fund manager Jonathan Lourie.

Louise previously shared regrets over her time on Strictly and said the show "simply wasn’t worth putting anyone I loved or love through the heartache”.

She said, “I still wish I’d done things differently because I feel like I hurt a lot of people and I’ll always be sorry for that.”