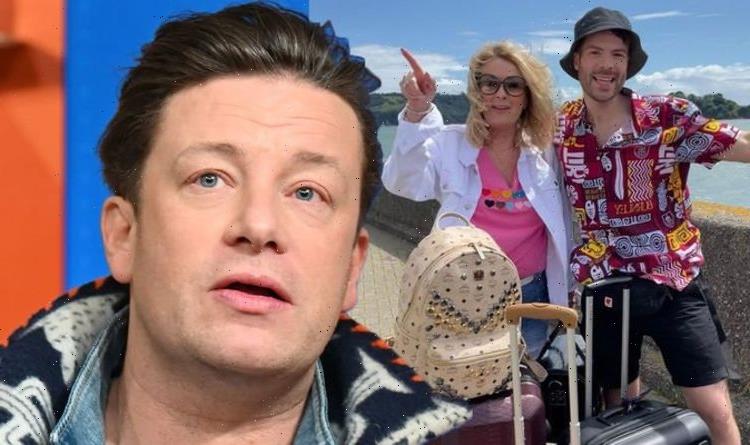 Beverley Callard claims she was ‘written out’ of Corrie’s 50th

Beverley Callard, 64, and Jordan North, 31, have jokingly announced in a new interview that Jamie Oliver, 46, is not welcome in Valencia. The pair met whilst on I’m a Celebrity… Get Me Out Of Here and are now on their own ITV show Beverley & Jordan: Destination Wedding.

They hate him in Valencia.

Speaking to Entertainment Daily! Jordan said: “They basically said that Jamie Oliver is not welcome.”

Bev added: “They hate him in Valencia.”

Jordan confirmed: “Because he puts chorizo in paella.”

The pair travelled on an epic Spanish road trip, with the end of the series being Bev renewing her vows with her husband Jon McEwan.

They travelled over 900 miles while filming the show, and travelled at one point to Valencia.

Jordan, according to Bev, had the idea to “choose the wine in one area, then choosing the cake in another area and the dress in another”.

In Valencia they only grow the rice there and that’s when the pair found out it was a sin to put chorizo in paella.

Their new series was originally planned to have four episodes, but producers extended it to give after filming so much content.

The duo met on I’m a Celeb and have built a friendship ever since.

I’m a Celeb was held in Gwrych Castle in North Wales due to travel restrictions caused by the Covid pandemic, which affected travel to Australia.

Two weeks prior to the start of the series, all participants, crew and presenters were isolated to ensure safety during filming.

Bev left on Day 16 coming tenth out of the 12 celebrities.

Jordan found overnight fame, and was loved by the public, coming out second in the whole competition.

This year, due to travel restrictions the show will be held in Wales again.

Speaking to the Evening Standard about his newfound fame, Jordan was finding it very overwhelming leaving the house.

He said: “I am under no illusion that I was the least known person [on the series].

“But my life has changed.

Since September, Jordan has presented on the main BBC Radio 1 drivetime show with Vic Hope.

Beverley and Jordan: Destination Wedding is on Wednesday’s at 8pm on ITV.