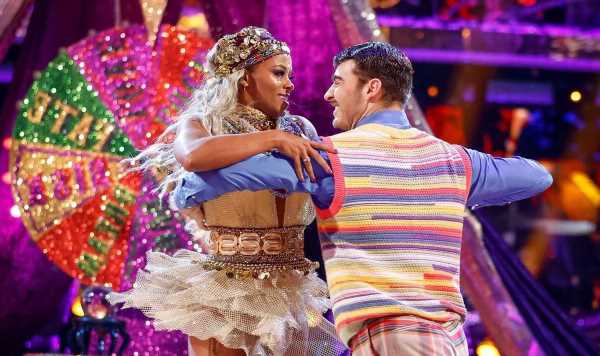 James Jordan has said Fleur East can be “way too much” on Strictly Come Dancing as he claimed there was a lack of traditional Salsa in her performance this evening. The former Strictly professional shares his thoughts on the dancing duos every week on Twitter and he doesn’t hold back on his honesty.

Critiquing Fleur and Vito’s latest dance, he tweeted: “She definitely has the power and energy but sometimes for me way too much.

“Also hardly any traditional salsa – too much twerking and hip hop steps instead of earthy basics.

“I still feel she could be great but not for me tonight.”

The dancer went on to wish Fleur a Happy Birthday and also scored her a seven out of 10.

In a follow-up post, he said he believes the singer, Ellie Simmonds or/and James Bye could be in this weekend’s dance-off.

Despite James’ comments, Fleur scored a respectable 32 out of 40 points for her efforts by the judges.

Head judge Shirley Ballas said of her moves: “Well our birthday girl, it had a reminiscence of the Cha Cha Cha, it had rhythm. Moving forward I would like to see a little bit more finesse, a little bit more grace but there is no disputing your power.”

Craig Revel Horwood added: “It was just a little bit messy for me.

“There’s no elegance, it’s got to be really smooth,” but also said it was a “powerful” performance.

Anton Du Beke told Fleur: “I love that on the edge energy, but you have to be ice like in the mind or it goes too far. That was on the cusp. Just be aware.”

Motsi Mabuse chimed in: “You bring a different type of energy and maybe we’re not used to seeing a woman so strong on the dancefloor. Maybe time for a change?”

Fleur said dancing to Beyonce’s Break My Soul was the best way to celebrate her 34th birthday.

She said: “I’m always Beyonce in my head – when I’m walking down the street, in the mirror in my room… so that was incredible.”

In a series of tweets, James also went on to claim that Hamza Yassin was undermarked by the judges.

The Countryfile star was praised for his Tango routine with dance partner Jowita Przystal as part of Halloween week.

“His shoulders did lift sometimes in the routine – losing his neck but I will forgive him #Strictly 9.”