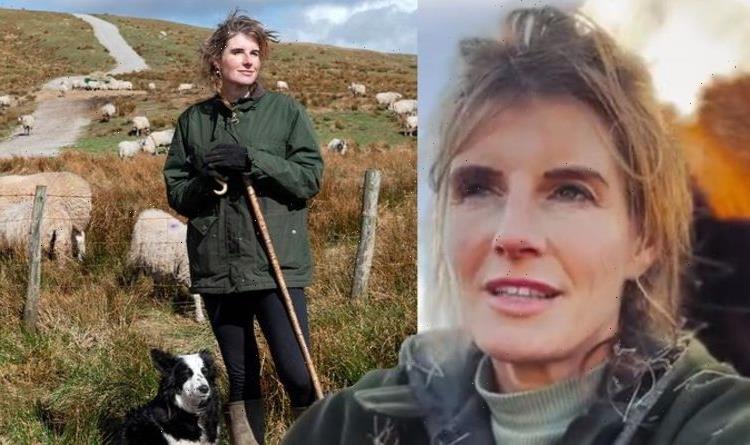 Amanda Owen discusses comparing her sheep to other farms

Amanda Owen, 47, has posted a video on Twitter explaining her solo career move to the BBC series, Winter Walks. Set to premiere on November 29 on BBC 4, Amanda will be the first to front Winter Walks, a show which will follow the star as she hikes from Bainbridge and Semer Water.

In view of her 183,300 Twitter followers, the shepherdess posted a video talking about her new show.

She penned: “Hello, my name is Amanda Owen, also known as the Yorkshire Shepherdess.

“As a shepherd and hill farmer a great deal of my life is spent outdoors, but you know what?

“Actually going for a walk, off my patch, it’s quite unusual.”

The shepherdess continued that “it was quite interesting to be able to get out” and explore the countryside around her.

She said she met a few farmers along the way and being on their patch she felt “a little bit uncomfortable”.

Amanda continued: “In this neck of the woods, we call it nebbing, being nosey.

“You see, even when I’m out for a walk and not walking for any particular reason, you can’t switch off.

“You take the job with you, I’m pretty much comparing my sheep with the sheep that I can see over the wall.”

The star said that to be given the opportunity to go and see her locality and what’s on her doorstep is a “wonderful opportunity”.

The BBC series is set to premiere today, with Amanda’s episode being shown this evening.

Amanda will hike from Bainbridge and Semer Water as she explores the falls between the two spots in Yorkshire.

Exploring the fells between the two locations, Amanda will offer some insights on the area and the joy of taking in the countryside.

Coming straight off Our Yorkshire Farm, the star will admit in the programme how strange it is to be leading a series without her family.

She explained: “It feels just a bit strange because I’m on my own. There’s nobody nipping at my heels, there’s nobody asking questions.

“That’s not to say that I don’t like being out and about with the family and the children – of course that’s great – but the old analogy, a dog being like its owner, is true.

“Because sheep dogs can’t switch off. They just want to work, their minds are buzzing. That’s how I feel.

“So many different things coming at you from so many directions. A bit of headspace is good for everyone.”

It won’t just be Amanda who appears on the series as Alastair Campbell, Kate Bottley, and Nihal Arthanayake will also feature.

Split into four parts, each episode will air nightly until Thursday, December 2.