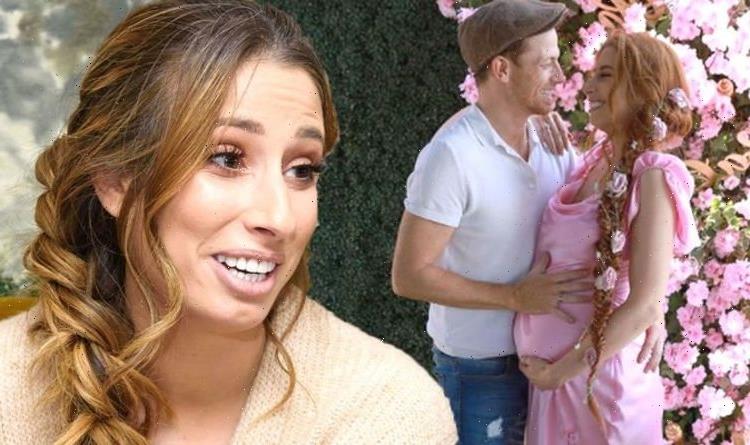 Joe Swash popped the question to Stacey Solomon on Christmas Eve. The couple last weekend celebrated their baby shower, ahead of the birth of their second child together.

So many people messaged me like: ‘Is this a secret wedding?’

The star-studded event was organised by the Loose Women star’s sister Jemma Solomon.

The latter, 33, has now revealed how many thought the event was actually a “secret wedding” for her sibling and the presenter, 39.

She said a number of people queried the real reason for the soiree at the pair’s new home, Pickle Cottage.

However, she made sure it reaffirm it was in honour of their first daughter, due in the coming weeks.

The pink-themed day saw Stacey’s loved ones gather together in her garden to celebrate her fourth little one.

She is mother to Zachary, 13, Leighton, nine, and Rex, two. Her youngest son she shares with Joe.

“So many people messaged me like: ‘Is this a secret wedding?'” Jemma stated.

She didn’t go into details about who had asked if Stacey and Joe were getting married, but did chat about organising the big day.

Jemma continued: “I will be honest, some of it I arranged quite far in advance, but the majority I did in a week.

“So I did it very quickly!”

Jemma said Stacey is “always so grateful” but she was nervous as the whole thing was behind the star’s back.

She added to OK! Magazine: “I mean it is scary when you do anything for anyone as a surprise.

In pictures of the baby shower, Stacey wowed in a pastel slip dress, while her hair was styled into a long, Repunzel-like plait.

Baby was spelt out in huge, light up letters, while a long table was adorned with flowers outside.

Stacey shared a number of snaps with her 4.6 million followers, saying: “Feeling so overwhelmed and emotional…

“What a beautiful day. My sister arranged a baby shower for me and our little girl and it was so special.

“I love you Jem Jem to the moon and back. I can’t believe she’s nearly here. So grateful for everything. And thank you Sun for shinning today.”