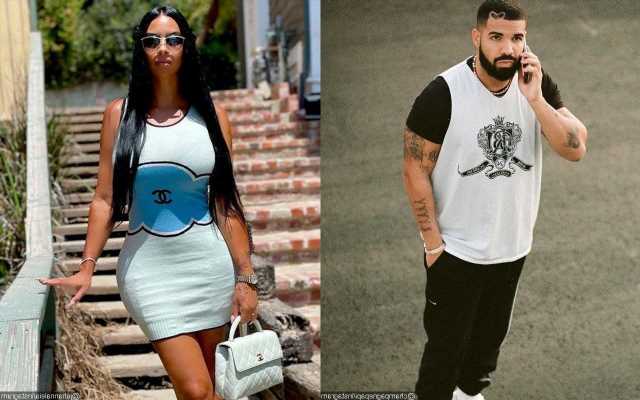 The ‘Way 2 Sexy’ hitmaker posts on his Instagram page a photo that features a woman placing her hands around his neck, two months after he was caught having a Dodger Stadium date with the model.

AceShowbiz -Is Drake following the trend to make a major relationship announcement via Instagram? The Canadian superstar, who is notoriously private about his love life, has sparked a speculation that she has confirmed his romance with Johanna Leia.

It was caused by one of his latest posts on his social media account. On Monday, September 13, the 34-year-old shared on the photo-sharing platform a picture of him cozying up to a woman. In the image, the woman placed her hands around his neck, while Drizzy acted cool by putting his hand inside his jacket pocket.

In the caption, Drake tagged the photographer who took the picture, but did not identify the woman in the snap. “Certified by Luis Mora,” so he wrote.

While the woman was not identified and her face was barely seen, many have since assumed that the woman in the image was her rumored girlfriend Johanna based on her curves. “The mother of a popular high school basketball player,” one Instagram user replied to another user’s question.

Another convinced fan detailed, “her name is johanna have she a son name amari Bailey he is a basketball player drake would go to his games to watch him play and watch the mom to.” Someone else chimed in, “He ain’t in love with her, he’s in love with her son’s POTENTIAL. Let’s be honest here!!!!”

Some others, however, believe that it’s not Johanna, but another woman named Hayley Karrina. Hayley herself seemed to have confirmed that it was her in the picture with Drake as she posted a black-and-white version of the snap on her own page. “certified,” so she echoed the “Hotline Bling” hitmaker’s caption.

Drake and Johanna were first rumored to be an item after they were spotted on a date. The “In My Feelings” hitmaker went the extra mile to impress his alleged new boo, renting out Dodger Stadium in Los Angeles in July.

However, that apparently wasn’t their first date as a source said they have been seeing each other for “several months.” People reported that the singer/rapper has become a mentor to Johanna’s 17-year-old son Amari Bailey, who is preparing to start UCLA as a basketball player in 2022, giving him advice on how to handle attention and pressure.

Last month, Drake spoiled Johanna’s son Amari with some serious bling. It was the high school basketball player himself who flaunted the iced out pendant of No. 10, his Sierra Canyon jersey number, on his Instagram page.