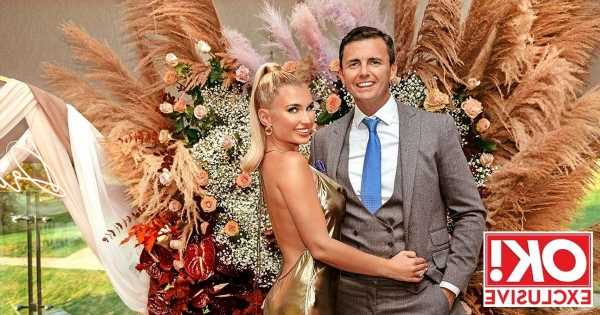 Here at OK!, we don’t like to have favourites, but Billie and Greg Shepherd are right up there. And when we meet the reality stars to discuss their 10-year anniversary party, which we were invited along to, they’re as entertaining as ever.

Much like their dynamic on new show Billie & Greg: The Family Diaries, Greg, 36, is the one cracking jokes throughout, while a slightly more sensible Billie, 31, fills us in on the details of their “amazing” big bash.

The couple, who are parents to Nelly, seven, and four-year-old Arthur, tell us the two-day party, which took place at the Cave Hotel & Golf Resort near Canterbury, was much needed after lockdown.

And emotions at the event, which was attended by Billie’s sister Sam and her close pal Ferne McCann, were clearly running high, with Billie telling us that “romantic” Greg caused everyone to shed a tear.

But despite being more loved-up than ever, the mum-of-two admits that the new dream home they’re building in Essex is making them bicker a lot. And she says they are just like any other couple when it comes to having their ups and downs.

“There’s never been a make or break point,” Billie says. “We tend to let each other know when we’re getting on each other’s nerves.”

Here, the happy couple take a trip down memory lane and reflect with OK! on 10 years together as they
talk foodie first dates, how parenthood has changed their relationship and what they love most about each other…

Happy anniversary! How was the party, guys?

Billie: Amazing! It was lovely because we did it across a day and night. Everyone arrived at the venue around midday and we had a few drinks and an afternoon tea. Then the men went and played golf and we went and got ready. The party started at about five-ish. It was brilliant. We had a cocktail booth, a photo booth and it was all decorated lovely.

How many guests did you have?

Billie: We had about 35 people there. It was just family members and close friends. My sister was there with Paul, my friend Ferne McCann, and Adam [Frisby] and Jamie [Corbett] from In The Style. We had a band called Ozzy & Stix, who played throughout the night. And then Greg surprised me with this amazing video with loads of memories and pictures from the last 10 years. At the end of the video the kids sang Crazy by Patsy Cline. Honestly, there was not a dry eye in the house! It was so emotional and lovely. It was a song my Nanny Wendy, who passed away earlier this year, always sang. Then Greg surprised me with a song, didn’t you, Greg?

Greg: Yeah! I’ve always thought of myself as a singer, so I sang Cosmic Girl by Jamiroquai for Billie, which is obviously quite a fast-paced song. There had been lots of driving around in the car trying to learn the lyrics a few days before, but we got there in the end.

Did you pull it off?

Billie: Yeah! It could have gone one way or the other I think, but actually, everyone was dancing and cheering and it was really funny. I could tell there was something going on because Greg was flapping around and rushing me along to do things. I could see he was a bit jittery and now, obviously, I know he was nervous about his big performance.

Greg, did you stay sober beforehand?

Greg: Oh no, we were drinking from midday and this was about 7pm, so I was absolutely Dutch-couraged up. I was ready for it. I wanted to get it done before I got too drunk, though.

Did anyone make a speech?

Greg: I did a tiny speech before the video played, just thanking Billie for being her beautiful self and saying how I think she’s got so much better with age.

Nice! You’ve said that you’re more obsessed with Billie now than you were when you met…

Greg: [Laughs] It is very true. She’s turned into a beautiful young woman.

Was there lots of dancing?

Greg: There was lots of dad dancing going on. Billie and the girls had a little shuffle as well. It was well needed.

Were there any nasty hangovers the following morning?

Billie: Greg and I were up early for breakfast, but it was just the grandparents down there at first. Then, throughout the breakfast, the younger people came down with some sore heads.

Billie, you’ve said that you feel very lucky as you and Greg genuinely get on really well…

Billie: To be honest with you, we have our ups and downs and we bicker like most couples, but I do feel like we’re…

Greg: [Interrupts] Billie is very, very lucky to have me!

Did you know when you first met that it was going to last?

Billie: Well, it was funny because after one or two dates with Greg, you know when you kind of get a feeling… I thought, “Yeah, he is the one.”

Has the time flown?

Billie: I know it’s a cliché, and obviously loads has happened and it’s been an amazing 10 years, but it’s actually quite scary that I blink and we’re here, 10 years later. The kids will be teenagers before we know it – it’s just crazy.

Who made the first move?

Billie: We were all on holiday – not together, but we had mutual friends – so we met up. Samantha said to
Greg, “You fancy my sister, don’t you?” and Greg said he did. When we got back from that holiday, Greg got my number and asked me out on a date. I’ll let him tell you about our first date…

Greg: I took her out for lunch in the Crazy Bear in Fitzrovia and she turned up in this green playsuit with her orange legs out. Then we went to the Charlotte Street Hotel, where she had her second meal, a fish pie. Then we went to the Sanderson hotel, where she had another meal. So she had three meals in one afternoon. I thought, “She loves her food, this girl.” We even had a cheeky kiss at the end of the night.

How soon did you know it was love?

Greg: For me it was about six months in. I didn’t know where I stood and I went to her, “What’s going on here? Are we on or what’s happening?” And she said, “Well, I don’t know what you’re thinking!” And I was like, “I’m in love with you!” Billie kept her cards close to her chest at first.

Were you doing that deliberately, Billie?

Billie: I think my personality… I’m not like a massive lovey-dovey or affectionate person. I’m not over the top like Greg!

What did your families think of each other?

Billie: My mum and dad really liked Greg. My dad was trying to give him some stick and wind him up, so he’d say things like, “He dresses like an estate agent!”

Have you both changed over the 10 years?

Greg: I feel like you grow up when you have kids, don’t you? Our lifestyle’s completely different now. When Nelly came along I thought, “It’s time to grow up now.”

What about you, Billie?

Billie: Yes, I think I’ve definitely learnt the art of patience with all three of them. As a couple, we love to have fun and it’s really healthy to do stuff together like date nights if you can. Even if it’s putting the kids to bed early and having a bottle of wine and dinner together. When we were younger we just had so much freedom. We’ve both matured and our priorities have changed.

Who’s the most romantic?

Did you buy each other anniversary presents this year?

Billie: We would usually go abroad to celebrate, but we decided this year that, because of the house renovations, we weren’t going to buy each other any extravagant gifts. We did have a lovely dinner and an overnight stay in London, though, and then we had the party, which was amazing.

What’s been your biggest challenge as a couple?

Billie: The house renovation has caused some bickering. We’ve taken on a huge project and there are a lot of deadlines to meet and decisions to make. But with Greg and I there’s never been a make or break point. We’ve always had quite an open and honest relationship and tend to let each other know when we’re getting on each other’s nerves.

What would you say you love most about each other?

Do you want more kids?

Billie: It used to be more me who wanted another one and Greg wasn’t sure, but actually now that they’re both at school and we’re moving into the house… I’d never say never. We might have more.

Describe Greg as a dad…

Billie: He’s a really kind, fun and generous dad. He’s not a lazy dad, that’s for sure. He’s get up and go, which I love.

Greg: Billie’s the safer one out of the two of us. Nelly laughed at me in lockdown because I didn’t know what a noun was! She caught me googling it. Billie’s a bit more clever than me and she’s more sensible. If they had a problem, they’d go to Billie.

Billie: It’s a good balance. They come to me when they’re hungry or ill, and they always want me to tuck them in at bedtime. But we also have a lot of fun.

Greg, tell us a bit about your new radio show…

Greg: I wouldn’t say I’ve got my own radio show but every Sunday I’m on Phoenix FM and I sort of co-present with Tony Smith from noon to 2pm. It’s good, I enjoy it. I do like the sound of my own voice! I don’t stop talking sometimes.

We can tell! Do you still see Sam a lot, Billie?

Billie: Yeah. Obviously she’s quite far away now [Sam lives in Surrey] and we’re limited to weekends because all the kids go to school. But we still do see each other as much as we can. She came over with Rosie and Paul [Sam’s children] last weekend for a sleepover and we talk every day.

And finally, what’s it like filming your new series, The Family Diaries, without Sam?

Billie: We were a bit nervous as you hope people will want to tune in and enjoy it, but we are really excited and can’t wait for everyone to join us on this next part of our journey.