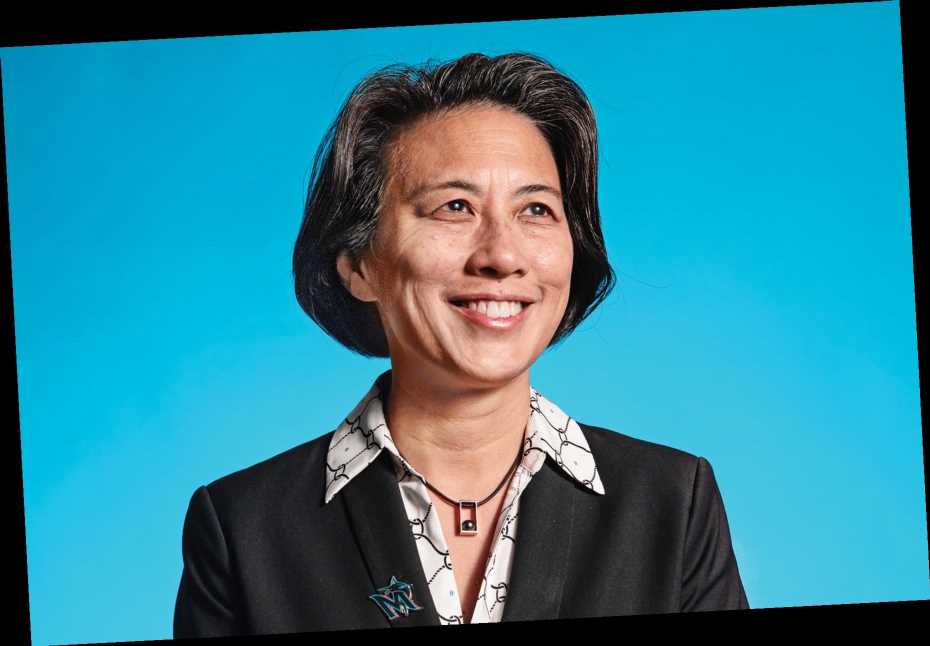 Starting in the early 2000s, sports pundits began predicting that, any moment now, Kim Ng would become the first female general manager in Major League Baseball. They floated the idea in 2005, when she interviewed for the job with the Los Angeles Dodgers. It came up again in 2009, when she was considered for the role with the San Diego Padres. Five times over 15 years, reports surfaced that Ng was on the short list to be a GM. But it didn’t actually happen until last November, when, finally, Miami Marlins president and co-owner Derek Jeter gave her the nod.

Speaking from her office in Miami, Ng, 52, describes the position as a “dream.” But that doesn’t mean it wasn’t excruciating each time she lost the job to a similarly qualified man — which, for the record, she says happened many more than five times. “At times I was a little bit confused about why the general managership wasn’t coming to me,” Ng says diplomatically. “I think at the end of the day, you keep the faith, and you just keep plugging away because, really, there’s no choice.” Besides, she adds, “if you’re in baseball, you’re fairly measured. We play 162 games [a year]. To be emotional on a daily basis is really not good for your health.”

Growing up in Queens, Ng loved sports. She played stickball with friends and tennis with her mom’s family, immigrants of Chinese descent from Thailand. At school, though, she got some pushback. “You know, ‘You can’t play because you’re a girl,’” she remembers. “I never really let that stop me, because I was better than some of the boys. I’ve just always had that mentality.” Ng’s enthusiasm for baseball came from her relationship with her Chinese American father, who rooted for the New York Yankees over their neighborhood team, the Mets. (“And I was from Queens — go figure!”) Though he died when she was 11, the two shared a special bond. “We didn’t always agree on everything, but I remember him feeding my love for the Yankees,” she says. She recalls a day when they went deep on the nuances of the righty-lefty split, a baseball-geek stat that indicates how well batters perform against right-handed or left-handed pitchers. “He knows at that point that I understood it,” she says with pride. “He was definitely a big figure in my life, in terms of my love for sports.”

For college, Ng opted for the famously nerdy University of Chicago, where she played Division III softball. “I just wanted to go to the best school that I could get into,” she says. “I also wanted to play softball, and I wasn’t being recruited by D-I schools. The University of Chicago was a good fit because it was a great school and because I could play there.” Though she studied public policy, she worked in her passion, writing her undergraduate thesis on Title IX, the landmark legislation that prohibits sex discrimination in schools and led to a boom in women’s athletics programs. The university was also where she met her husband, Tony Markward, who’s now a winemaker (not quite college sweethearts, they were “college somethings,” she says, with a laugh).

A year after Ng graduated, while she was still living near campus, her former coach put her in touch with the Chicago White Sox, just 20 blocks north. They were looking for an intern; she ended up working her way up in the organization, staying for six years. Ng was the odd woman out in the office, but never felt like that held her back. “I think early on in my career I was definitely a novelty,” she says. “People were skeptical, but I gradually won them over. I approached learning in a very respectful way, and I think they appreciated that.” She left the Sox in 1997 for a gig at the American League, consulting with teams across the country as a rules and regulations expert. Brian Cashman, then the assistant general manager of the Yankees, got to know her while she was in that position. In 1998, when he was promoted to GM, she was a natural fit to come on as his right-hand. “She was a dual threat,” says Cashman. “She possessed, obviously, great knowledge, and she had this amazing demeanor about her. She would connect with anybody and everybody, whether it was the player-agent side, whether it was on the club side, whether it was on the media side. She’s just got a great likability factor.”

Ng was the youngest-ever assistant general manager in MLB history, and only the second woman ever to hold the position. It caused a stir in New York, but even George Steinbrenner, the legendarily cantankerous owner of the team, was excited to have her on board — and not just because of the “media circus” that ensued. “I remember seeing a little bit of a twinkle in his eye,” says Cashman. “He never was one to make compliments, but I could tell he really liked Kim, and he was really proud of being a part of that event.” Ng excelled within the Yankee organization, helping the franchise earn three World Series rings and working to retain Jeter, then the team’s star player, through the difficult process of arbitration. (Ng believes that part of her story may have been overblown: “I was just another one of Derek’s victims,” she jokes. “He kicked our butts.”) In 2001, she left for the Los Angeles Dodgers, where she was assistant GM for a decade. In 2011, she took over as senior vice president of baseball operations for Major League Baseball, working under Hall of Famer Joe Torre, who managed the Yankees during her tenure with the team.

Last year, when she was tapped by Jeter, Ng knew it was the right fit. She’d done her homework; his vision for the team lined up with the organization she wanted to lead. They were scrappy and full of “grit,” qualities she admired. (Despite multiple players battling Covid-19 during the 2020 season, the Marlins were able to play enough double-headers to not only catch up, but also make it to the playoffs.) But she remembers the struggle it took to get there.  “I’ve always had to elbow my way in, that’s for sure,” she says. “But I never had a problem. At times it has been uncomfortable, honestly, but you have to do it because that’s what you want to do. You want to play stickball with the guys, you just have to get through it.”