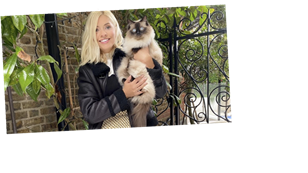 Holly Willoughby has given fans a rare look at the garden at her £3million west London home.

This Morning presenter Holly, 39, posed in various outfits and alongside her adorable cat Bluebell in photos taken by her daughter Belle for her latest Marks and Spencer clothing range.

Holly was in quarantine after her family break in Portugal was cut short due to restrictions put in place by the coronavirus so she could return to the This Morning sofa on time.

During which, Holly and her children clearly made the most of their time as her kids Harry, Belle and Chester, helped her take snaps of the blonde beauty around her incredible home.

One snap, shared on Marks and Spencer’s Instagram account, shows Holly smiling while hiding her pet cat Bluebell as she wore a stunning yellow, full skirt with a black aviator jacket.

Holly is standing on a grey and white pattern tiled outside flooring and is surrounded by greenery.

Meanwhile, in the background fans can catch a glimpse of the family’s swimming pool, which is behind a large, black cast iron gate.

Another photo shows Holly in a stunning blue, floral shirt dress and a bright yellow cardigan as she leans against a raised flowerbed with plants growing up bamboo shoots.

Various bushes can be seen around a smiling Holly and a tomato plant appears in the foreground of the image.

Meanwhile, a third photo shows Holly looking chic in a stunning patterned midi dress with a beige coat over her shoulders and a pair of grey, pointed-toe ankle boots.

Holly is standing next to a large concrete table with grey rattan chairs are resting on her patio, which is lined with a number of different bushes.

Mum of three Holly revealed she had done an at-home photoshoot as she posted a rare photo of her daughter Belle, five, doing her makeup.

She wrote in the caption: “So this is what we’ve been up to… @marksandspencer to the rescue!!!!

“Quarantine turned quaran-dream yesterday when Harry, Belle and Chester turned photographer and shot the new season’s clothing drop… which M&S very kindly gave me a sneak peak of ahead of the launch.

“I’m Super impressed with the kids camera skills and the all important final checks from Belle.”

Referring to the photo, which has the words “coming soon” on the top left corner, Holly said: “Here’s a little teaser of what’s launching at M&S mid-September in time for autumn… Best way of keeping them entertained ever!”