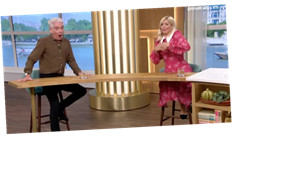 Holly Willoughby and Phillip Schofield were left squirming in their seats on Monday’s episode of This Morning after they saw a little more than they had bargained for.

Former Big Brother contestant Josie Gibson, who often presents segments on the hit breakfast time show, was broadcasting naked, alongside a group of nudists to promote a new competition to win a car.

As the show had progressed Josie had become more confident so had joined the group of bare bottomed folk by stripping down to the buff, concealing her modesty with a bunch of cue cards.

The other men stood behind, using windbreaks and newspaper to cover their flesh, however rather unfortunately one man was less successful at this than the others.

As the segment drew to a close one member of the Liverpool group, whose body was supposed to be concealed behind a car door and a towel, moved slightly and his groin area and penis were revealed live on camera.

Holly and Phil, back in the studio, squirmed and giggled at the mistake, as of course nether regions are off limits on day time TV.

As the camera cut back to the dynamic television duo they could be seen looking absolutely gobsmacked as they shrieked at the man’s loss of modesty.

They covered their mouths to stifle laughs, as they lost all composure in utter shock.

The humorous accident prompted host Phillip, 58, to exclaim: "That was close, that was close! We were right on the ragged edge there."

During the segment Josie had cracked several jokes before removing her kit.

When looking at one of naked men, she has roared: “It’s a big one” – an innuendo, as she was supposedly talking about the competition.

Viewers took to Twitter to reveal their shock upon watching the show.

One wrote: "What! Why are they at a nudist place to promote the competition or am I seeing things?!"

While another added: "Josie asking a naked representative of a nudist community if they’ve seen a 'rise in new members' I am HOWLING."