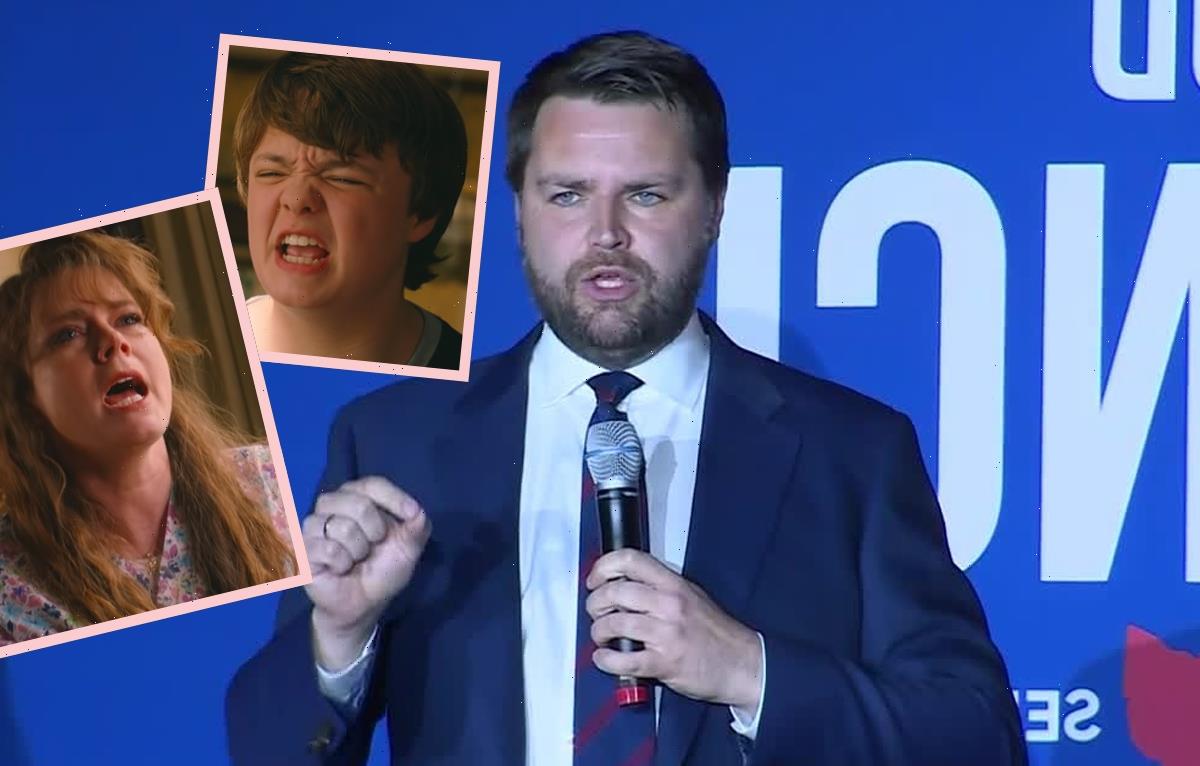 In short, Vance gained fame as the author of Hillbilly Elegy: A Memoir of a Family and Culture in Crisis — a story of his youth as a child of poverty in rural Kentucky, where he saw firsthand the forgotten people of America during financial and opioid crises. Netflix even made it into a movie starring Amy Adams and Glenn Close.

However, the bestseller has been criticized for its leaps in logic to conservative talking points about self-reliance and the supposed evils of welfare programs, as well as broad stereotypes of poor folks in rural areas. See, like other conservative figures before him, he may have exaggerated his whole “pulling himself up by his bootstraps” origin story. Before going to Yale, Vance didn’t really fight his way from the bottom — he wasn’t even from the mountains of East Kentucky, he just spent a few summers there. He actually grew up in the suburbs of Cincinnati.

So near as we can tell, he’s basically the Hilaria Baldwin of the Appalachians. Hillbilliaria, if you will.

OK, with that in mind… Donald Trump loves this guy. And with that glowing endorsement he was able to win the Republican nomination for Senate in Ohio.

During his campaign, he spoke at Pacifica Christian High School in Southern California last September where he gave an answer that’s just now resurfacing, thanks to Vice. Speaking about the sanctity of marriage, he spoke about why people shouldn’t get divorced. And he made sure along the way to strongly imply that even if the marriages are violent, divorce isn’t the answer! He said:

“This is one of the great tricks that I think the sexual revolution pulled on the American populace, which is the idea that like, ‘well, OK, these marriages were fundamentally, you know, they were maybe even violent, but certainly they were unhappy. And so getting rid of them and making it easier for people to shift spouses like they change their underwear, that’s going to make people happier in the long term.’”

Making it easier for women to get out of violent marriages — when it was historically very difficult? Hey, that does sound like it will make them happier in the long term. Also the short term. You know who won’t be happy about it? The men who think of them as property.

“And I think that probably, I was personally and a lot of kids in my community, who grew up in my generation, personally suffered from the fact that a lot of moms and dads saw marriage as a basic contract, right? Like any other business deal, once it becomes no longer good for one of the parties or both of the parties, you just dissolve it and go onto a new business relationship. But that recognition that marriage was sacred I think was a really powerful thing that held a lot of families together. And when it disappeared, unfortunately I think a lot of kids suffered.”

Vice has the full clip:

There’s no doubt divorce can be rough for kids. But staying in dangerous situations, and modeling that dynamic for your children, is clearly far worse. Also, implying that the idea is some BS made up by hippies is worse than regressive, it’s insulting to the women who have suffered through such marriages and dangerous to the ones still too scared to leave. He’s appealing to Christian “family values” and talking about marriage being “sacred” — while in the same breath downplaying the experience of abused women. It’s yet another example of a platform where women’s experience is brushed aside, with their rights disappearing right behind.

(In case you were wondering, yes, he’s against abortion in all forms. He’s even said he thinks women should be legally forced to bring pregnancies to term even in cases of rape and incest. He applied the appropriately folksy aphorism, “two wrongs don’t make a right” to the situation. You won’t believe it, but he’s also anti-gay, declaring that marriage is not just sacred but specifically “is a lifelong union between a man and a woman.”)

Well, the reason the quote is going around now is that Vice shined a light on it by pressing Vance on whether he really thought “it would be better for children if their parents stayed in violent marriages than if they divorced.”

His answer? It’s wordy, but essentially he says that domestic violence is actually worse in unmarried relationships — you know, all those people living in sin. Like the ones that get married somehow get cleansed at the church and the abuse stops?

It’s that same kind of magical thinking as that Republican who insisted women who get pregnant must not have been raped because “if it’s a legitimate rape, the female body has ways to try to shut that whole thing down.” Y’all remember that?

“I reject the premise of your bogus question. As anyone who studies these issues knows: domestic violence has skyrocketed in recent years, and is much higher among non-married couples. That’s the ‘trick’ I reference: that domestic violence would somehow go down if progressives got what they want, when in fact modern society’s war on families has made our domestic violence situation much worse. Any fair person would recognize I was criticizing the progressive frame on this issue, not embracing it.”

He’s “criticizing the progressive frame” — which he’s already said is the idea (that he thinks is a lie) that women being able to divorce abusive men is a good thing. That’s what he doesn’t cotton to. That “myth.” Sigh.

“But I can see that you are not a fair person, so rather than answer your loaded and baseless question, let me offer the following: I’m an actual victim of domestic violence. In my life, I have seen siblings, wives, daughters, and myself abused by men. It’s disgusting for you to argue that I was defending those men.”

It doesn’t seem like anyone was arguing he was defending those men. Just that he was arguing on their behalf that they should get what they want, which is their abused wives staying with them.

Yeah, it doesn’t make a lick of sense to us. But neither did his book, so… there ya go.

As to the truth of his comments, well, as it turns out simple math proves he’s actually just wrong. From Vice:

The outlet also asked the followup of whether “he thinks people in violent marriages should generally stay together or get divorced” — to which his spokesperson said to refer to his previous comments.

Well, we still don’t think his previous comments are very nice, and folks seem to agree — as quite a few are referring to them this week.

On the bright side, his campaign spokesperson told Vice that Vance “does not support changes to current law with regard to divorce.” So he doesn’t actually want to make it tougher legally for women to leave their husbands. However, Vance said he is “a very big fan” of a law that Hungary’s right-wing government passed that gives newlywed couples low-interest loans which they don’t have to pay back if they have three children. Doesn’t that just sound so sacred??

Connecticut senator Chris Murphy tweeted in response to the news: