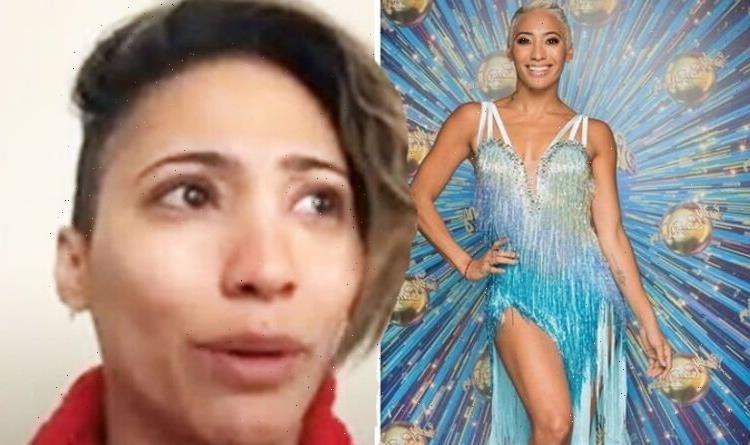 Karen Hauer has served as the longest-serving female professional dancer on Strictly Come Dancing after she joined the show in 2012. The BBC favourite has since spoke candidly about her younger years as she addressed her family difficulties.

The 39-year-old, who was born in Venezuela, moved to the United States at the age of eight.

The professional dancer discussed how “failing” was never an option for her as she addressed the struggles her mum faced raising three children.

Karen opened up in a candid chat with Louise Minchin on the former BBC Breakfast presenter’s Push Your Peak Podcast.

The dancer explained that her father had left the family a year after they arrived in New York.

Louise asked: “Why was failing not an option for you?”

“When I got to New York I was eight years old and from Venezuela. My mum didn’t really have time for me to be silly,” Karen recalled.

“My dad pretty much abandoned us when we got to New York within the year.”

She added: “It was just my mum with three kids.”

The TV star explained that her mum Mirian expected her daughter to ensure she did well at school.

“My only responsibility was to go to school, be good and do well,” the professional dancer commented.

“I was never that kid where my mum had to go to the school and talk to the teachers because I was being bad.

“I was always very focused because I wanted to do good for my mum.”

She continued: “I had to be responsible because I didn’t want to be a hassle because she had so many other things to worry about.”

“And you kind of, almost… I mean my brother and sister, we were all the same. We had to be focused because none of us wanted to get on the bad side of my mum.”

Louise remarked: “That’s very powerful and motivational on every level.”

“Absolutely,” Karen agreed. “I think sometimes as a minority and as a female… I’ve always been an immigrant wherever I’ve gone.”

“The US became my home when I was there. But I’ve become very much a part of this country. I’ve always wanted to fit in and be a part of a family and a structure.”

She added: “Because my structure was not there from the beginning. I think that if I kept a good structure for myself it would help to keep me on track.”

Two years after moving to New York, she won a scholarship to the Martha Graham School of Contemporary Dance.

She studied African, contemporary and ballet before moving on to ballroom and Latin at 19.

Following her move to the UK, Karen has continued to enjoy success as a dancer on the BBC’s Strictly Come Dancing.