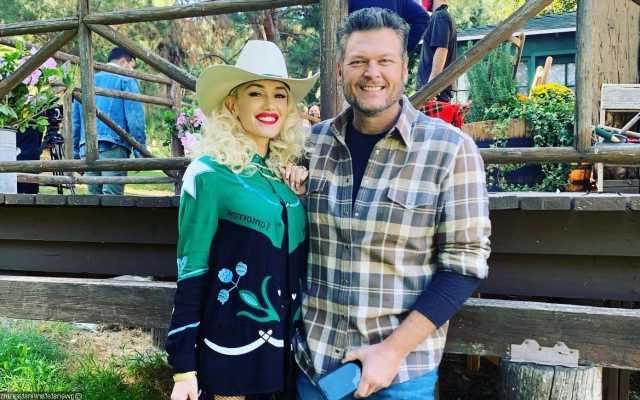 The ‘Don’t Speak’ singer cannot help but swoon when she insists on ‘The Ellen DeGeneres Show’ that she does not make up the loving nickname she and her husband have for each other.

AceShowbiz -Life after marriage gets sweeter for newlyweds Gwen Stefani and Blake Shelton. When appearing in the Wednesday, April 6 episode of “The Ellen DeGeneres Show“, the “Don’t Speak” singer revealed cute nicknames she and her husband have for each other.

“She calls me pretty girl,” the 52-year-old gushed during the Burning Question game segment. She couldn’t contain her smile after being asked, “what nicknames do you and Blake call each other?” by host Ellen DeGeneres.

The “Hollaback Girl” hitmaker then squealed in excitement before continuing, “I didn’t make that up. He made it up.” She went on to reveal her country singer husband’s nickname. “Blakey,” she said. “We all call him Blakey.”

In July 2016, Gwen and Blake tied the knot in a small and intimate wedding attended only by close friends and family. During her appearance on “Ellen”, the former frontwoman of No Doubt admitted that she fantasized about having bleachers for the big day, but was grateful that “(the wedding) just got smaller and smaller.”

Gwen went on to explain, “The Lord works in mysterious ways. It was like the perfect amount of people.” She added further, “It was so intimate. It was so exactly what it needed to be.”

The “Nobody but You” singer then added that marriage life with the 45-year-old country singer couldn’t get any better. “Not just the wedding, but the marriage is so fun! I’m so into it so I feel very blessed,” she said.

Having first met as co-judges through NBC’s “The Voice” in 2014, Gwen and Blake started off as good friends. In the summer of 2015, the pair grew closer after having been through their own divorces.

Gwen later admitted to Howard Stern that she was surprised to learn about Blake’s split. “I was in shock, because I felt like he was exposing me. I just couldn’t even wrap my head around it,” she admitted. “It was during that time, he came up to my chair… I never saw him look so upset. So then I was like, ‘I gotta talk to you.’ “

Soon after, Gwen and Blake began to date each other. To Howard, she further stressed that she wasn’t trying to start a relationship, but their connection blossomed naturally.