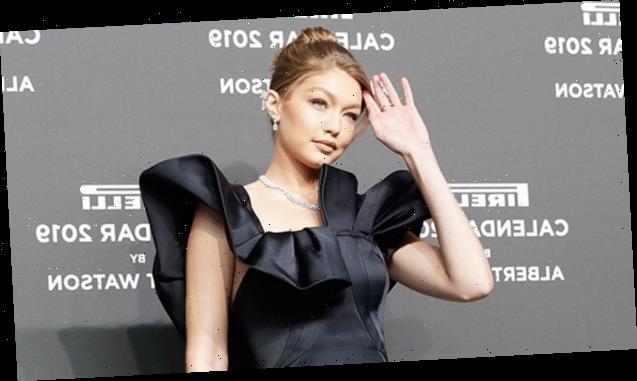 Gigi Hadid is stunning in a series of behind-the-scenes clips from her recent maternity photoshoot! The supermodel shared clips of her growing baby bump dressed in a number of stunning looks on August 31.

Pregnancy is a good look for Gigi Hadid, who’s expecting her first child, a baby girl, with boyfriend Zayn Malik. The supermodel, 25, took to Instagram on Monday morning to post behind-the-scenes clips from her maternity shoot at 33 weeks pregnant. “Making-of,” Gigi wrote with a smiley face in the caption of her post. The videos included a slew of different looks: two clips of the model in white and green sheer dresses, and another of Gigi in unbuttoned jeans and a ribbed white tank top.

Gigi first shared photos from her maternity shoot to Instagram on August 26. The black and white portraits, which were taken by photography duo, Luigi and Iango, revealed her bare baby bump under a sheer dress. Although Gigi’s a seasoned pro when it comes to posing for the camera, she revealed that the maternity shoot wasn’t her easiest one.

“I loved it, I knew what I wanted from the pics and Gab and L&I really made it happen for me. But was definitely more tiring than working normally,” Gigi replied to a fan on Twitter, who inquired about behind-the-scenes details from the shoot. “Got through the second look and was like ‘guys I think I can only do two more’ hahaaaa,” the model explained. Fatigue is quite common in pregnant women, especially during the third trimester.

Gigi confirmed she’s expecting her first child with the former One Direction singer during an appearance on The Tonight Show With Jimmy Fallon on April 30 — four months after the couple rekindled their on-again, off-again romance.

“Obviously, we wished we could have announced it on our own terms, but we’re very excited and happy and grateful for everyone’s well wishes and support,” Gigi told Fallon in reference to pregnancy reports that circulated right before she appeared on the late night talk show.

The expectant couple has been quarantining together at her mother Yolanda Hadid‘s farm in Pennsylvania. Gigi celebrated her 25th birthday at the end of April and shared a collection of photos with her boyfriend and family, including sister Bella Hadid, who spent a portion of quarantine with the couple. Residing in PA during the COVID-19 pandemic has allowed Gigi to enjoy her pregnancy in private — something she’s admittedly “cherished.”

Gigi and Zayn began dating in 2015 and announced that they had split for the first time in March 2018. They later reunited, and broke up again in January 2019. Gigi went on to have a brief fling with Bachelorette alum Tyler Cameron, who was spotted with the model at her grandmother’s funeral in the Netherlands in September 2019. Gigi and Zayn got back together for good in January.