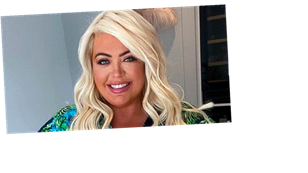 Get celebrity exclusives straight to your inbox!

Gemma Collins has wowed fans as she showcased her slim figure while promoting her new fashion range.

The TOWIE beauty, who recently launched an exclusive pyjama collection for In The Style, showed off the best pieces from the fashion range as she flaunted her figure.

Fans couldn’t get over how incredible the 39 year old looked as she posed in a series of sets, including a palm tree cover-up. “Wow, you look different but so amazing,” one fan wrote on the snap.

While a second added: “Stunning! You look amazing.”

While a third fan wrote: “Omg Gemma you look stunning.”

It comes after producer Naughty Boy pulled out of a music collaboration with the TV star, after she promised to release a “summer banger”.

The 35 year old music star has now shared his decisions to pull the plug on any form of duet with his unlikely reality TV star friend.

Speaking to The Sun, the producer admitted: “I love the GC. I was going to do something with her as she can sing, but I have my priorities.

“I think she has potential but it has to come from her. She has to really want it. I wish her all the best with it.”

At the end of last year, Gemma revealed she had plans to release a “summer banger” with the music mogul.

The GC, who recently showed off her midriff after her weight loss, excitedly said: “I had to put my music on hold because this year ended up being so busy.

“I was working with Naughty Boy and we were looking to get out a Christmas song but our schedules didn’t line up and we couldn’t make it happen.

“Obviously I have a contract in place with Universal and they have been really supportive.”

Reality star Gemma had even been getting lessons to improve her vocals before recording the track.

She added: “We’ve got an amazing song in the bag and it can come out at any time, so we are looking at next summer. It’s written and all finished, which is really exciting. I’ve been having singing lessons whenever I can fit them in.