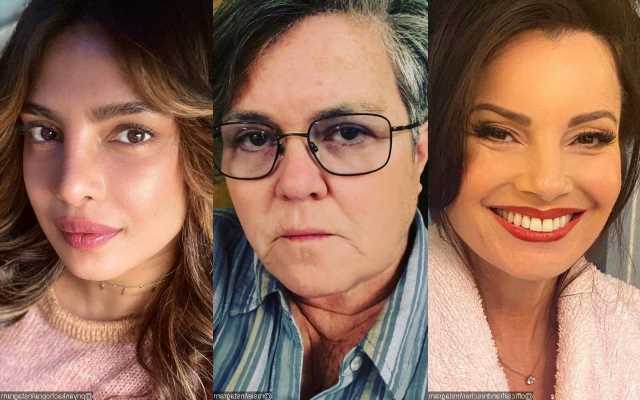 The comedian previously made headlines over the awkward run-in with Priyanka and husband Nick Jonas at Nobu in Los Angeles where she mistook the ‘Quantico’ alum for author Deepak Chopra’s daughter.

AceShowbiz -It’s a ride or die for Fran Drescher and Rosie O’Donnell. Fran jumped to her pal Rosie following the latter’s gaffe as she mistook Priyanka Chopra for author Deepak Chopra’s daughter.

“Rosie is a very dear friend of mine, and she, ah, you know, sometimes regrets something she might have done because she would never want to hurt anybody,” the 64-year-old actress told Page Six on Wednesday, April 6. The “Nanny” alum claimed that the 60-year-old comedian is “very good woman.”

“She is fearless for fighting for the underdog,” Fran, who was with Rosie when they had an awkward encounter with Priyanka and Nick Jonas in February, went on to gush. “She has tremendous character in that regard. She goes to the mat when others wouldn’t. So yeah, you know, not knowing somebody’s name or something should be her greatest offense.”

Rosie made headlines over the awkward run-in with the couple at Nobu in Los Angeles. “I said, ‘Hi, Nick Jonas, you were great in Kingdom,’ ” the former “The View” co-host recalled in a TikTok video at the time.

She later shared her interaction with the “Quantico” alum. “[I said,] ‘Hi, I know your dad.’ She goes, ‘You do? Who’s my dad?’ And I go, ‘Deepak.’ ” She added that the actress later corrected her by saying, “No, and Chopra is a common name.”

Rosie then issued an apology to the couple. “Nick Jonas, I apologize, and to the Chopra wife, I apologize too,” the “A League of Their Own” star said. That, however, only earned her more backlash.

Priyanka also appeared to shade the comedian for referring to her as “the Chopra wife” in her apology. “We ALL deserve to be respected for our unique individuality and not to be referred to as ‘someone’ or ‘wife’ especially in a sincere apology,” the “Baywatch” star wrote via her Instagram Story in February. “If we can learn to respect our differences in an authentic way, the world we raise our children in will be amazing.”

“If you wanted to make a public apology for a very awkward private encounter, I think probably best to take the time to google my name before doing it or even try to reach out directly,” she added.