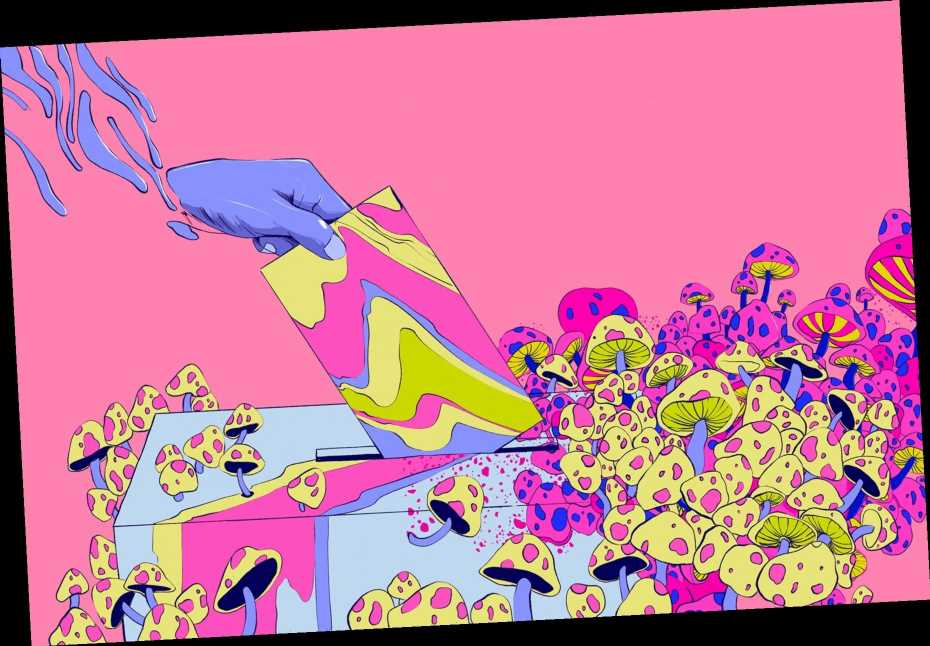 At this point, there’s no question: researchers, investors, and stakeholders agree that psychedelics will be legal as pharmaceuticals in the next decade. The FDA has already granted both MDMA, the base drug of Ecstasy, and psilocybin, one of the primary psychoactive components in magic mushrooms, “breakthrough therapy status,” putting them on the fast-track to legality as medications for mental health. In the wake of this progress, the conversation has evolved beyond whether psychedelics will be legal to how they will become legal — and what that legality will look like, both federally and locally. Will there be state-legal psychedelic therapies, even as they remain federally prohibited? Will psychedelics first become legal as FDA-approved medications, which can only be administered under the supervision of trained therapists at a licensed facility? Or will decriminalization initiatives birth a movement of home-grown plant medicines? Most likely, we’ll see a combination of these post-prohibition paradigms, as we’re seeing already — exemplified in the collection of psychedelic measures voters will decide on this election.

This November, voters in Oregon and Washington, D.C. will have the opportunity to pass initiatives at the ballot box which could lay a foundation for the rest of the country. Oregonians will be voting on two historic measures pertaining to psychedelic reform: the first initiative ever aiming to legalize, not just decriminalize, psilocybin therapy; and an initiative that would make the state the first in the U.S. to decriminalize all drugs. At the same time, Washingtonians will decide whether to decriminalize natural psychedelic plants and fungi, from ayahuasca to San Pedro cacti to mushrooms. This measure, known as Initiative 81, is part of the larger Decriminalize Nature campaign — in other words, while the legislation has been organized by D.C. locals, it parrots the original Decriminalize Nature initiative that passed in Oakland, California last year, and which has been replicated and successfully passed in Santa Cruz and Ann Arbor, as well.

The Decriminalize Nature movement is meant to be decentralized: While activists in Oakland set a precedent for decriminalizing all psychedelic plants and fungi, groups in more than 100 cities and counties around the country — from Chicago to Dallas to Berkeley — have been writing similar bills to fit their communities’ specific needs. The measure in D.C. is unique because it will be the first time local citizens are deciding on the vote, rather than city council members.

While all this movement is invigorating, it’s also important to understand each measure’s individual differences — and how they fit into greater conversations about public health and the need to end the war on drugs.

What are the ballot initiatives that could decriminalize or legalize psychedelics?

In Oregon, Measure 109, a.k.a. PSI 2020: The Oregon Psilocybin Service Initiative, would legalize the administration of psilocybin by approved facilitators to anyone in the state over 21 who shows they could benefit from it and doesn’t have a health condition that would make it dangerous. (The measure does not get more specific about who would qualify, this is something that would be worked out after the measure is passed.) Akin to California’s original medical marijuana law passed in 1996, Measure 109 is a medicinally focused bill, intent on providing access to psilocybin for healing. It does not provide any protections for folks who choose to forage, grow, gift, or take mushrooms on their own, but it does loosely define who will qualify to be an approved facilitator so that underground practitioners without a therapy license might be able to apply for a state license.

Oregonians will also be voting on Measure 110, which would decriminalize personal possession of all drugs in the state, from psilocybin and LSD to heroin and methamphetamine; this is more of a criminal justice reform bill, focused on shifting to a health-based approach to substance use. It would establish addiction recovery centers throughout the state, something which Drug Policy Action director Matt Sutton says Oregon desperately needs.

Natalie Ginsberg, director of policy and advocacy at the Multidisciplinary Association for Psychedelic Studies (MAPS), a nonprofit that’s been paving the way for psychedelic research and reform for decades, says she’s encouraged by the breadth of the new initiatives. “Measure 110 is the first instance of the decriminalization of psychedelic substances MDMA and LSD in the country,” she says. “MDMA is the psychedelic substance that people are arrested for most in the U.S. — certainly more than the plants, fungi, and cacti in the Decrim Nature initiatives — so for folks interested in psychedelic policy reform, 110 is really the most impactful legislation.”

Initiative 81 in D.C. is also first and foremost a police-reform bill, says Melissa Lavasani, chairwoman of Decriminalize D.C. Much like the Decriminalize Nature initiative first passed in Oakland last year, it would make the possession of psychedelic plants and fungi the lowest law enforcement priority. If someone were charged for possession, it would also prevent the attorney general from prosecuting them.

Despite the focus on police reform, however, Lavasani, who proposed the initiative with her husband, also speaks passionately about the importance of access to psychedelics for healing, particularly during the pandemic as rates of depression soar. All the Decriminalize Nature initiatives, as well as the initiative which decriminalized psilocybin in Denver last year, include “grow, gather, gift” stipulations with the intention of allowing folks to home-grow psychedelics that have shown therapeutic potential. “A lot of people are struggling because of the pandemic —and pharmaceutical drugs are not always the answer,” says Lavasani, who became an advocate after psychedelics healed her debilitating postpartum depression.

Sam Chapman, campaign manager for Initiative 109, made a similar case in Oregon. According to a report by Mental Health for America, Oregonians have the highest rates of mental illness in the nation. People are suffering, today, says Chapman — and while federal legalization might take a while, local efforts are needed right now. “We can’t wait any longer,” he says. “That’s why we’re moving forward.” According to Ginsberg, efforts to approve psilocybin therapy at a state level, and at a federal one, could work side-by-side.

If the Psilocybin Therapy Initiative passes, the state would have two years to figure out the specifics. A psilocybin board, appointed by the governor, would decide along with the Oregon Health Authority what the requirements are to become a trained, licensed psilocybin facilitator, what types of settings are approved for the treatment (i.e. retreat centers, hospitals, clinics), and whether psilocybin can be administered to groups, or just individuals.

In order to get the initiative on the ballot, Chapman says, their campaign collected 160,000 signatures from more than 300 cities in Oregon, so he knows there’s support for it across the state. Right now, however, it’s looking like the vote is “going to be close,” he says, and that they really need volunteers — from both inside and outside the state — to be calling Oregonians to educate them and encourage them to get to the polls. The success of the campaign, he says, won’t just have implications for Oregon, but for the entire psychedelic movement.

“There’s probably not a state anywhere that doesn’t have a funder or activist who isn’t watching our initiative closely,” says Chapman. “We know from cannabis that the first state to go is the one who becomes the model for the next ten years.” Chapman says he’s already heard whispers from folks interested in getting a similar psilocybin therapy initiative on the ballot in 2022 in states from Washington and Colorado to New York, and Florida.

How can psychedelic legalization help end the war on drugs?

Meanwhile, says Ginsberg, “there’s a decentralized network that’s starting to form to talk about how groups who are enthusiastic about psychedelic access can work with folks to end the war on drugs.” This is vital, she says, because people, particularly people of color, continue to be incarcerated for drugs other than psychedelics at much higher rates than they are for psychedelics. In response, MAPS, despite its primary focus on psychedelic reform, has taken a stance for the decriminalization of all drugs.

According to Ginsberg, MAPS is aware that “psychedelic exceptionalism” — when psychedelic drugs are framed as “better” than others — “can actually perpetuate harms of the war on drugs, including perpetuating stigma, so we do a lot of work to counter that,” says Ginsberg. “We don’t believe that some drugs are better than other drugs. We believe drugs are dangerous because of drug policies.”

This gets to the heart of some internal debates within the psychedelic community and the broader criminal justice movement about whether psychedelics should be decriminalized first or whether all drugs should be decriminalized at once. In the Decriminalize Nature initiatives, like the one Lavasani is heading in D.C., focusing on just psychedelics has allowed these campaigns to create a narrative around mental health and healing, even though these bills do not put any kind of therapeutic program in place. In Oregon’s initiative to decriminalize all drugs, however, the narrative has been largely shaped around racial and social justice. According to a study released by the Oregon Secretary of State and compiled by the Oregon Criminal Justice Commission (OCJC), Oregon’s decrim measure would decrease racial disparities in drug arrests by 95 percent.

Lavasani, of Initiative 81 in D.C., and Chapman, of Oregon’s Psilocybin Therapy Initiative, both replied to questions about the need for broader criminal justice reform similarly: They, of course, support it, they said, but it was just beyond the scope of their current measures. Ginsberg, for her part, says she wants to encourage folks to think bigger when it comes to decriminalization.

“After Denver decriminalized psilocybin, people were kind of shocked that right away the movement moved to decriminalizing all psychedelic plants,” she says. “People were like ‘oh wow, we were able to make that jump,’ so I want people to recognize that similarly the jump from decriminalizing psychedelics to decriminalizing all drugs is not as big of a jump as people might expect.” Point being, Oregon’s range of drug policy reform efforts shows how activists can bridge the gap in the so-called psychedelic exceptionalism debate: Rather than singling out some drugs as good enough to be legal or decriminalized and others not — a classist, racist paradigm which inevitably keeps certain demographics behind bars — the coexistence of Measures 109 and 110 offers a glimpse at what humane drug policy could look like once the War on Drugs is over once and for all.

Regardless, Ginsberg says the good news is that every psychedelic policy reform initiative will present an opportunity for other jurisdictions to learn and refine their own versions — and that means there’s the potential for a lot of movement this November.