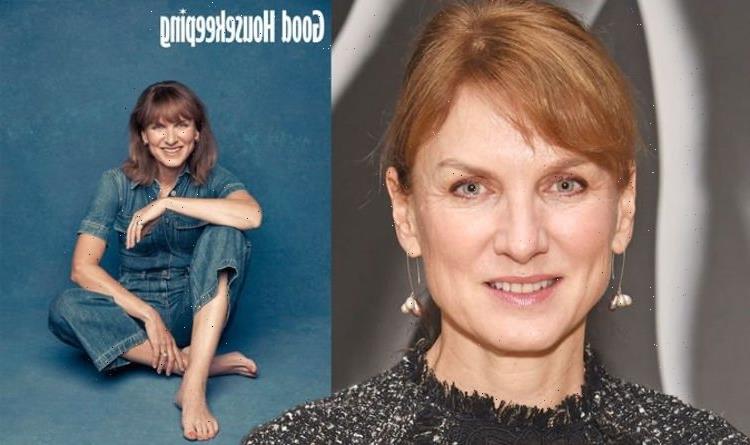 Fiona Bruce, 57, chatted with Good Housekeeping about working during the pandemic and juggling motherhood. The Antiques Roadshow presenter revealed she may have not spent as much time with her children as she wished, due to her hectic lifestyle.

Did I spend enough time with my children?

Fiona is the October cover star for the magazine and revealed many details about her personal life behind BBC screens.

She commented: “Did I spend enough time with my children?

“I think I scratch the surface of any working woman and she always thinks, probably not.”

The star tied the knot with husband Nigel Sharrocks in 1994 and they share 22-year-old Sam and their teenage girl.

She said: “There has never been any question that they take precedence over everything in my life, and always have done.

“It was definitely helped by having the same nanny living with us for 20 years.

“She left when Mia finished her GCSEs, but she’s a firm family friend.”

The broadcaster has been the face of BBC shows for nearly 30 years and is currently presenting BBC’s Question Time.

Fiona worked throughout the pandemic, informing the country during the panic of 2020.

There was a struggle for her presenting during this time due to the NHS app and self-isolation, however she did enjoy the fact she could carry on doing her job.

She said: “It was really good to keep going as it gave me a focus and it felt important to keep people informed.”

Fiona is described as ambitious by many due to juggling motherhood and her job; however she has never been a fan being questioned about if she saw herself as ambitious.

She said in the candid interview: “I was thoroughly sick of it because I never heard a man being asked that.

“It’s the same as only women being described as feisty.

“You want to do as well as you can in your job – that’s human nature.”

Question Time returned with a live audience last week, something Fiona discussed in her interview.

She added: “There is no substitute for having people actually there, seeing what they want to talk about and gauging their reactions when the politicians speak.

“Having a live audience makes the programme an event – it’s the bit I enjoy the most.”

Read the full interview with Fiona Bruce in the October issue of Good Housekeeping on sale now. It is available in all supermarkets and online at MagsDirect https://magsdirect.co.uk/magazine-category/lifestyle/good-housekeeping-lifestyle

Question Time airs Thursdays from 10.45pm on BBC One