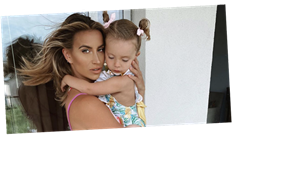 Ferne McCann has joked on Instagram about a newspaper getting the name of her daughter wrong.

The reality star, who recently revealed she doubts herself as a parent, shared the hilarious mistake with her millions of followers.

The publication accidentally got their days of the week mixed up and ended up calling her two-year-old Sunday by 'Monday'.

The former TOWIE star shared a picture of incorrect caption, which read: "Ferne with daughter Monday."

Taking the opportunity to promote her show Ferne McCann: First Time Mum and make light of the situation, the mother-of-one, said: "This is your 1 hour countdown until Monday & I are back on your screens with ep 2 of #firsttimemum @itvbe 9pm."

Ferne's celebrity friends commented on the mix up and joined in on the laughs.

"This is amazing," Made in Chelsea star Binky Felstead wrote alongside crying with laughter emojis.

Ferne's laughter comes after she expressed how happy she was about being able to have footage of Sunday growing up from her reality show.

Speaking to new magazine, the reality star said: "We're documenting so much of Sunday's early years.

"I think that'll be so nice to play back to her when she's older and show her the madness and the brilliant-ness of how our life is at the moment," she expressed.

Ferne has been a single mum to daughter Sunday after splitting from ex Arthur Collins, who is currently serving 20 years in prison for a horrific nightclub acid attack.

Explaining what she finds to be the most challenging thing as a single mum, the I'm A Celebrity runner-up said: "I guess the hardest thing is doubting myself as a parent and wondering whether I'm making the right decisions."

"These early years are really crucial and can actually shape their future," she continued.

"And having to do that and make those decisions on your own can be really difficult."