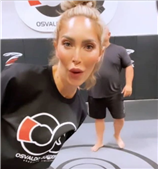 Farrah Abraham has many jobs these days:

She’s a single mom, an influencer, a creator of adult content — and we’re sure she’s got like 93 other side-hustles going on at any given time.

So maybe it’s fitting that Farrah is constantly switching up her look.

Some entrepreneurs wear a lot of hats, Farrah wears a lot of faces.

Of course, most people who get a lot of work done and use a lot of filters are pretty open about it.

Farrah, on the other hand, wants to look completely different every few weeks, but never have anybody mention it.

Yes, Ms. Abraham is sporting yet another set of new features this week.

At this point, we’re starting to think she’s like that guy from Game of Thrones who could just pick a different face off the wall and transform into someone else whenever he felt like it.

Anyway, Farrah went live on Instagram over the weekend so that she could offer fans a look at her martial arts/self-defense training regimen.

Unfortunately for her, fans were much more interested in Farrah’s face than in anything that she was doing with her body.

“Calm down on the surgery, can you not see your lips are hanging all different directions?” one fan commented.

“WTF did you do to your face?”a second inquired.

“Why do you use always a filter on your face! All that surgery…” a third chimed in.

Well, we might never have an answer for what exactly Farrah did to her face, but we might have an idea as to why she’s been going so hard in terms of fillers and injections lately.

Last week, Farrah reminded the world that she’s soon to hit a milestone in her life.

“It’s almost May, my birthday month! Oh my gosh, it’s my big golden birthday – 30. I’m so scared,” she told her Instagram followers.

Perhaps she was looking for some reassurance that she’s aging well, or that all the money she’s shelled out for plastic surgery is really paying off.

But this is the internet in 2021, and few people on social media attract criticism quite as reliably as Farrah Abraham.

So instead of external validation, Farrah received — well, the opposite of that.

“WOW with all the injections, implants, and plastic surgery you look 40,” one commenter wrote.

“She didn’t need all that surgery and I’m sure she would be aging a lot better if she never went through with it. Or at least kept it subtle,” another chimed in.

Okay, so, Farrah has had a lot of plastic surgery, and she’s not generally thought of as a very good person.

So it’s tempting to roast her when she shows off yet another cosmetically-enhanced look, but as always, we’d like to encourage you to make fun of Farrah for reasons other than her appearance.

After all, mocking people’s looks is for bullies, but pointing out the various ways in which Farrah is big old dummy — well, that’s a genuine art form, folks.