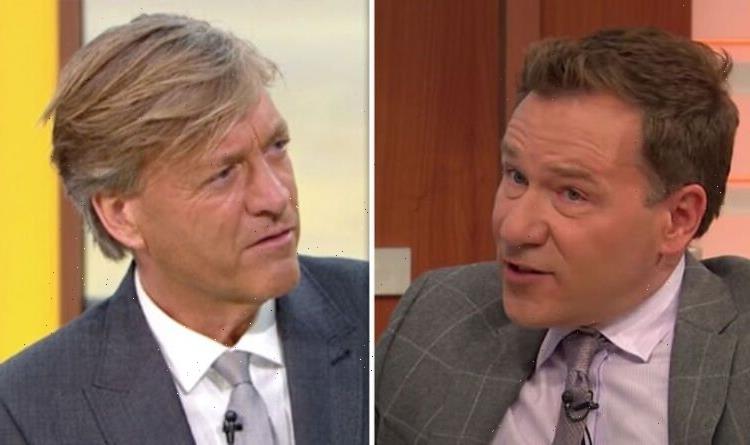 Good Morning Britain star Richard Arnold, 52, has lifted the lid on a hilariously awkward blunder incurred by 65-year-old host Richard Madeley. Arnold also revealed he was such a big fan of Madeley when he was younger, he even sent off for a signed picture of TV icons Richard and Judy.

Arnold recalled the unfortunate day Madeley mistook fake tan for moisturiser while he was at home getting ready – and he grew steadily more orange throughout the morning.

“My favourite moment was when he fake tanned and got darker and darker through the course of the show, I think even he was alarmed. Shades of Richard Madeley for everyone,” the Entertainment Reporter told The Sun.

And with Madeley, his unpredictability is all part of the fun, says his colleague and longtime fan.

“With his train of thought, sometimes it is like trying to nail down a grasshopper. You don’t know where it’s going to land, and I love that,” said Arnold.

But Arnold admitted he grew up watching Madeley with wife Judy Finnegan on daytime TV, so it was an honour to work alongside him when he joined the show to stand in for Piers Morgan.

“When I was a student way back in the day I used to watch Richard and Judy as a student,” Arnold explained.

“I sent off for a signed picture of the pair of them. It’s odd finding yourself working with someone you’ve grown up watching.”

Madeley recently sparked backlash on GMB after he grilled Matt Hancock over the former Health Secretary’s decision to offer his house to Ukrainian refugees.

The former Health Secretary revealed he “warmly welcomed” the proposal and is prepared to house a family of five. However, the interview sparked a backlash as viewers turned their attention to whether Madeley and Reid would be doing the same.

Madeley went on to skewer Hancock on whether his latest move is an effort to rebuild his reputation – which the former minister denied.

The host asked: “The elephant in this room in this interview is that we all know there will be cynics watching this and people who will go online and they’ll say the reason you’re doing this is to help rebuild your reputation after you had a bad political fall and you’re in the wilderness and that’s why you’re doing this to improve your standing. What would you say to people who say that?”

Hancock replied: “This came from me doing constituency work which doesn’t often get talked about but all MPs do it and nearly all of them really enjoy it.

“I was on BBC Radio Suffolk yesterday morning talking about the scheme and I was asked straight up, ‘You’re encouraging other people to sign-up, are you going to sign-up?’” he said.

“I answered the question and your team phoned and asked, ‘Would I come on?’

“So I didn’t do this in order to do it in public but if by me coming on and us having this discussion I can encourage other people who are in a position to, to go on the website, sign-up, it’s really easy.”

GMB viewers turned their attention to Madeley and Reid, accusing them of belittling Hancock.

@TonySpinola2 pointed out: “@GMB you talk about taking in refugees, Richard Madeley has a second home how many is he housing and yoyrself.” (sic)

“@GMB how many people are Suesanna & Richard taking in? If they are so concerned I’m sure they can have few families,” @Ces129tw agreed. (sic).