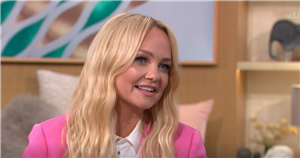 Emma Bunton has offered Spice Girls fans hopes of another reunion tour – and this time it could include Victoria Beckham.

The singer appeared on This Morning on Tuesday to talk about her new parenting manual, Mama You Got This, and shared that she'd caught up with Victoria over the weekend who didn't feature in the 2019 reunion tour.

As presenter Phillip Schofield asked whether there were any plans in place for a new Spice Girls tour, she replied: "Not at the moment, we would love to, but it's just seeing where the world is, really.

"I was with Victoria just at the weekend and I think we would love to as the Spice Girls, it's the 25th anniversary coming up and there are a few little bits, there are plans."

So it sounds like Spice Girls fans have some exciting things to look forward to – although Spice World 2 is unfortunately not on the cards.

Asked about rumours of a second film to follow up on their 1997 movie, Emma said: "There isn't a movie…I know nothing about it.

"I heard David Walliams say, 'oh, I hope I'm in that one.' I would love to get him in a movie with us, but no, that is not in the plans at the moment."

She also tipped fans off to look out for a solo Christmas show like the one she performed at the Royal Albert Hall in 2019.

Emma said: "Fingers crossed, I'm talking about hopefully doing something this Christmas again, it's my favourite time of the year, I love getting up there, I get to do a few Spice Girls numbers, a few solos."

As Emma, 45, shared her own experiences of parenting while she spoke about her new book, she recalled one tour with the Spice Girls that had been particularly tough as it took place just a couple of months after she gave birth.

She said: "It was two months (after I gave birth) and actually my mind was ready, but physically I was not ready to go back on tour. I fell over quite a lot on stage and I was still lactating and I just wasn't ready to be back on stage really.

"I came off stage once and I said to the physio, 'what's wrong with me?' He laughed and said, 'what do you mean what's wrong with you? You've just had a baby, your hips are not back in place.'

"I just wasn't ready, I definitely did it too quickly."