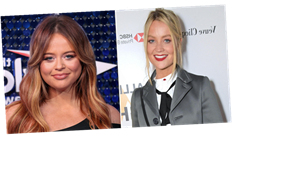 A source explained that the longstanding ITV show needs a fresh perspective and bosses believe The Inbetweeners star, 30, and 35 year old Love Island presenter can provide just that.

Speaking to The Sun, the insider said: "The show definitely needed a bit of a shake-up and bosses hope Emily and Laura can do that. It’s one of ITV’s biggest brands and there’s still lots of fun to be had with it."

Emily has appeared on the show numerous times, including last year when she shared a cheeky kiss with captain Mel B and scored a bonus point.

They added that show host Keith Lemon, 47, a.k.a. Leigh Francis, is excited to get the ball rolling on the programme after the new captains were allegedly confirmed.

“Keith can’t wait to ­initiate the new team captains into the show and there are plenty of surprises lined up for viewers," they said.

Holly Willoughby confirmed that she’d quit her role as team captain on Celebrity Juice after 12 years in May, reportedly in order to spend more time with her family.

Holly, 39, announced her decision to quit the show on Instagram, in a lengthy post which began: "Thank you @celebjuiceofficial for 12 years of fantastic chaos… I can’t quite believe what we’ve done and how quick that time has gone.”

Spice Girls star Mel B, 45, was also reported to have relinquished her role on the programme due to her "busy" schedule.

Celebs such as Holly Willoughby and Ferne McCann are loving leopard print – get the looks here from £9.99

A source close to the pop singer is claimed to have told The Daily Star that she's "loved" her time appearing on the hit ITV show alongside her pals Keith and Holly but her hectic schedule has made it difficult for her to commit to another year.

"Melanie has loved working with Leigh [Keith], Holly and the whole team at Celebrity Juice but next year is going to be very busy for her," the insider said.

A spokesperson for Celebrity Juice is said to have confirmed the news to the same publication as they said: "Mel has been a brilliant team captain and we'd like to thank her for all the laughs. We have no doubt she'll be back to banter with Keith as a guest on the show in the near future."